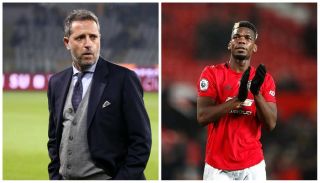 Paul Pogba will have to lower his wage demands if he is to join Juventus anytime soon.

That’s a warning issued by Juventus’ sporting director Fabio Paratici and it comes as a result of the coronavirus financial crisis.

Speaking to Sky Sports Italia (via The Sun) about the Manchester United midfielder, which is intriguing because we are not used to seeing executives or sporting directors in the media discussing specific transfers, Paratici said: “Pogba is a fantastic player, we know him as a champion.

“But something will change after the coronavirus crisis, because logically the salary demands someone at his level would have had before is now more difficult to get hold of. Or, at least, he’ll have fewer clubs prepared to pay that money.”

Pogba shouldn’t need telling that football needs to change. Before this pandemic he may have demanded a salary similar to Cristiano Ronaldo in Turin.

However, reflecting on why no player can earn as much as Ronaldo at the Serie A side, he added: “Cristiano is a different player to all the others. He brings incredible and exponential growth in revenue, representing a brand that is almost as big as a club.

“Clubs will certainly have some more difficulties to deal with, so with less income, we’ll need to be more creative and elastic, finding a different formula for transfer deals.”

This could be an interesting time for the sport. People have complained the game would go bust if the excessive spending continued to rise, and with the Saudis buying Newcastle we’ll likely see another crazy spending spree in the Premier League.

But will we? Nobody knows what’s going to happen one way or other.

Do you want him to stay and sign a new contract? Let us know on Twitter (@StrettyNews).