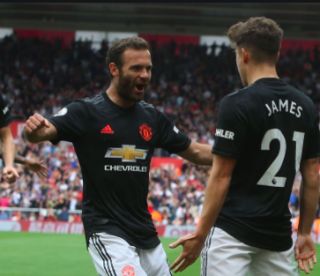 The nicest man in football…

Manchester United winger Daniel James has revealed the influence Juan Mata had on him settling in quickly at Old Trafford.

James made the move from Swansea City this summer in a deal reported to be worth £15m.

It was a left-field signing from Solskjaer in plucking a relatively inexperienced player from the Championship, but also a sign he is looking well into the future in his rebuild at the club.

The 22-year-old made an electric start to life at United, winning the club’s August player of the month award.

His goal contributions have since dried up but there can be no doubts that he has had a positive impact in his first season in the top division.

Mata, who was one of the players idolised by the Welshman growing up, immediately tried to make James feel at home in his new surroundings.

“He is just someone who I always looked up to,” James told Sky Sports.

“To play in the same team is just surreal for me. I think when I first met him it was just a bit weird. Growing up as a kid, looking up to someone and then end up playing with them. Not just being great on the pitch but off the pitch as well, someone that obviously inspire me a lot.

“I think when I first met him he came and sat next to me in the changing room and he said ‘I know it is a big move for you, if you need anything here is my number. If you ever need a message, or someone to talk to I’ll be here’. That was great for me.”

It’s impossible not to like Juan Mata and this sort of gesture from a senior player that James admires would have helped him enormously.
The Spaniard is a great personality to have around the changing room, regardless of the fact he is playing a more sporadic role in the first-team these days.