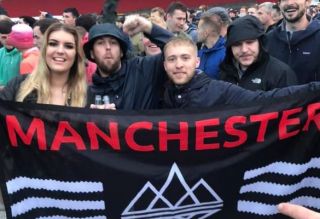 During these tough times during lockdown, we have all been craving the escapism that football provides on a weekly basis.

With so much emphasis on retro content like Premier League years and re-runs of vintage matches, it is important to keep the content coming whilst football has, quite rightly, become a secondary.

With that in mind, I decided to create a new weekly feature, which will look to encompass as much of the Manchester United family as possible.

It is called ‘My Love for Manchester United’, which will give the readers fun insight, and maybe even spark debate, into the United story of my guest.

There was only one place to start, to be truthful: The guy who, after I came away from the Stadium of Light in 2012 crestfallen and seething at Sunderland smugly poznaning at the away end, gave me the platform to vent my spleen on the club I love and it all took off from there.

Tell us a bit about yourself, when did you start supporting United?

As a kid I remember all the United shirts and the excitement football brought to the people around me. I would spend hours beyond hours in my grandmother’s garden with a ball, breaking windows and trying to perfect Becks’ technique.

Very much so. I had many influences. The man I call my father, Jason, thought me everything I know about United and took me to many games. I remember watching matches at such a young age with keen interest — and being infuriated by Arsenal fans in the pub.

But I must mention another person who I also love dearly. My grandad Andy did his best to convince me to join the dark side (Liverpool) but was clearly unsuccessful. Still, I wouldn’t change him for the world, and it adds some spice to family gatherings. “Manc T***” he refers to me as in the nicest way possible!

Cristiano Ronaldo was the best but my favourite has got to be Roy Keane.

Most hated rival club and player of all time?

Liverpool and I despise that camera kissing, DJ bottling, Scouse clown and loved it when he slipped on his arse for the world to see. Can you guess who I’m talking about?

Right now that would Virgil van Dijk. Some irony from my last answer, I know, but he’s class.

United v Barcelona, Champions League semi-final 2008. Old Trafford was bouncing. The Reds had drawn 0-0 in Spain and even Lionel Messi couldn’t deny them in the second leg when a Paul Scholes rocket lifted the roof off the stadium.

Glazers in or out?

I’m starting to think so, yes.

Many thanks to Dale for being my first guest on My Love For Manchester United, I hope you have enjoyed this and come up with your own answers.

Fancy appearing on next week’s feature? Keep your eyes peeled to the Stretty News Twitter.