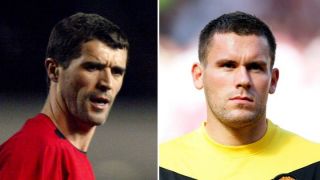 Former Manchester United goalkeeper Ben Foster has admitted that he was happy to see Roy Keane leave the club in 2005.

What?! Keane was coming to the end of his career but I thought the only person at United happy to see the back of the Irishman was Sir Alex Ferguson…

Foster has his reasons which we find laughable. Reflecting on his comments it really is no wonder he didn’t last at United and fell down the table in the Premier League — now playing for Watford.

Terrified by Keane’s presence, Foster told the Peter Crouch podcast (quotes via the Mirror): “He’s a scary bloke. I was s*** scared of him. I rolled the ball out to him too slow apparently.

“He absolutely b****cked me. He stopped the ball, b****cked me, then turned around and carried on.

“I was glad he went in the summer — I was so glad he signed for Celtic a few weeks later.”

Perhaps Keane knew instantly that Foster would never make it at United because let’s be honest, there’s no comparing their mentalities.

Foster only made 23 appearances for United in his six-year stay.

Maybe I’m just being a crank but I find this bizarre because we’ve seen in recent years how difficult it is to win football matches without a designated leader.

It’s clear Foster isn’t a winner which explains why he’s won nothing after leaving Old Trafford.