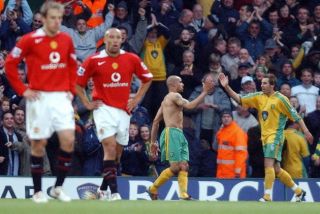 Leon McKenzie had visits from murderers wanting to hear stories about scoring against Manchester United when the former Norwich City striker was jailed for trying to avoid a speeding conviction.

He had fellow prisoners — some whom are murderers — coming into his cell to talk about his career in football.

Having spent six months behind bars in 2012, McKenzie told Pink’Un: “I learned to be productive, not to feel sorry for myself and take it on the chin.

“I found myself counselling in there. I have got murderers coming into my cell, people from all walks of life sitting down and talking to me about my goal against Man United or certain goals they were familiar with, and big, grown men crying their eyes out saying ‘I miss my children’.

“It was obviously quite scary. I was all over the news and TV and pretty much the jury was out for me. I got into a few altercations and I had to look after myself in there,” he added.

Since getting out of prison, McKenzie has been spreading awareness ab out the pitfalls of fame among younger footballers.

This is especially important for the youngsters who don’t make it, whether that be due to injury or whatever, as many go lost when their football careers sadly come to nothing.

Moreover, McKenzie is someone who also battled his demons throughout his career, so when he talks we can believe it’s with a degree of experience.

Scoring a goal against the mighty Reds will probably go down as one of the best moments in McKenzie’s career.

Starting out as a 17-year-old at Crystal Palace, he went on score in every tier of the English league.

McKenzie previously spoke to The Sun about his battles with mental health.