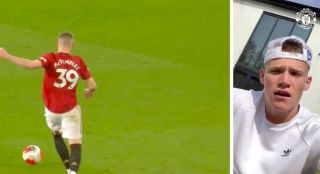 Manchester United midfielder Scott McTominay has revealed his favourite ever moment in a red shirt.

Unsurprisingly, the 23-year-old has opted for his incredible 40 yard effort to seal the fantastic win over Pep Guardiola’s Manchester City in the derby last month.

We have seldom seen such euphoria in the Stretford End as there was when McTominay pounced on Ederson’s horrendous error to slot into an empty net.

The victory extended Ole Gunnar Solskjaer’s side’s unbeaten streak to 10 games and boosted hopes of a finish in the Champions League places.

Unfortunately, we have been unable to see the Reds in Premier League action since and there are few indications of how and when football will eventually return.

But we couldn’t miss out on another chance of showing McTominay coming back from injury and making his mark in the derby.

Relive the special moment below, courtesy of Manchester United:

I think we all know what @McTominay10 has chosen 😉 pic.twitter.com/gLZBYvGY2J