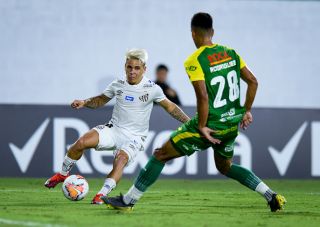 Venezuela international Yeferson Soteldo has reiterated his desire to make a move to Europe in the future and sign for Manchester United.

The Santos midfielder has revealed he would sign a lifetime contract at Old Trafford if given the chance to sign for Manchester United.

I mean, is it possible to fall in love with a footballer even though you haven’t seen him play?

Looking at our archives, Soteldo has popped up previously to admit that he wants to join the Red Devils, so I think we can say he is looking for a transfer pretty soon.

Soteldo joined the Brazilian side in 2019 but is already looking for a big move to Europe.

Everton already have one diminutive winger from South America in Bernard, but the Toffees have been linked with Soteldo since Santos president Jose Carlos Peres spoke to Calciomercato revealing that the Merseyside outfit are keen on the player.

Peres added that he told Inter Milan to pay €35m (£32m) for Soteldo while praising his ‘sensational skills’.

In a recent interview, the 22-year-old expressed his desire to sign for United and believes he has the attributes to be a hit in the Premier League.

“I don’t like rumours, I have my while family in Venezuela. I want to finish this stage at Santos by December, with the Copa Libertadores and whatever is possible and then take another step,” he told Gazeta Esportiva, as cited by Manchester Evening News.

“I always dreamed of playing for Manchester United, the dream remains intact.

“There are many steps to get there, but I feel I can. I want to go to Europe, but not to go and come back.

“I want to go and pursue my career with greater success. I feel like I’m prepared and I have to wait for the right moment to do it.”

He was then asked whether he’d accept an offer from United even if Real Madrid or Barcelona came knocking.

But United is his dream and part of the reason is how his idol Cristiano Ronaldo became a superstar at Old Trafford.

He added: “I’ve been following Cristiano Ronaldo since I was a child, I saw him at Manchester United and that’s why my love and desire is to play at Old Trafford.

“I would choose them easy. I would sign a lifetime contract.”