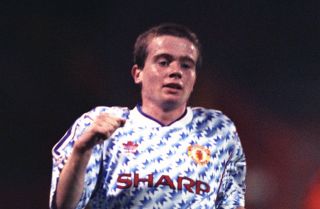 If someone said to you to name a talented Northern Irish winger who played for Manchester United, one name would come to mind; George Best. A little bit harder perhaps, but if you were asked about the talented Class of ’92 player who’s career was stopped in its tracks by a knee injury, Ben Thornley would ring a bell. Then if someone begged the question of which of United’s footballing geniuses was one to recite poetry and show a strong interest in the arts, King Eric will be the most likely answer. However, there is one name that answers all of these questions but is rarely mentioned; Adrian Doherty.

Manchester United are a club rich in history and greatness, but with this we also are left with asking ourselves of what could have been, the dreaded “what if?”. What if that Elizabethan plane had successfully taken off on the third attempt in 1958? What if Mark Robins hadn’t scored the winning goal against Nottingham Forest in 1990? What if Ravel Morrison displayed a discipline and commitment that matched his talent? Another question should be in here… what if Adrian Doherty hadn’t injured his knee against Carlisle Reserves a week before he was due to make his first team debut?

Adrian Doherty, known as “The Doc” to his peers, is not an everyday name in the world of football and you may have never even heard of him. How is a player whose ability is held with such high regard by those who were fortunate enough to see him play have barely any available footage or even his own Wikipedia page? This is what makes Doherty somewhat of an enigma and all the more interesting.

One of the issues that I have found with being a Manchester United fan growing up in the 1990s is that we have been spoilt with so much success and greatness, that players who, great in their own right, are being overshadowed by even greater players. Our history is usually focussed on two eras; the Matt Busby years and the Alex Ferguson years, both of which had an almost unfair amount of talent in their youth systems. We hold the Class of ’92 as the epitome of youth development, however, to your every fan in the street, the Class of ‘92 refers to six players: Ryan Giggs, Paul Scholes, David Beckham, Nicky Butt, Gary Neville and Phil Neville.

We all know that six players do not make up a team and in the 2013 documentary, we see the household superstars playing a friendly match with their former colleagues who didn’t make the cut. We see the likes of Robbie Savage, who went on to have a moderately successful career with Leicester, Birmingham and Blackburn amongst others. Keith Gillespie, who made himself had a reasonable career seeing him play over a hundred league games for Newcastle and Blackburn, although he would have his demons throughout his career. Then we see the ones who stayed in the game, but in a less glamourous environment. Ben Thornley, one of the first to make his debut for the Manchester United senior side, become somewhat of a journey man in the lower leagues, making most of his professional appearances with Huddersfield. Then you have Chris Casper, who retired at 24 from injury, but not without having a taste of some professional football in the lower divisions as well. However, Adrian Doherty wasn’t to be seen playing in this friendly match.

As Manchester United became champions for the first time in 25 years in 1993, Adrian Doherty was in the final days of his first and only professional contract, ready to turn his back on football forever. With the exception of a few appearances in the League of Ireland with Derry shortly after his United career, Doherty did not play any form of football again, but what is it that make The Doc a fascinating person to learn more about?

Doherty, from the small town of Strabane, was signed up by Manchester United at the age of 14, having been scouted by Nottingham Forest, Arsenal and Celtic amongst others. The manager of his local team at the time was in fact a United fan and contacted the club to send a scout because he was that sure of Doherty’s ability and wanted him to play for “his club”. The comparisons with George Best were constant and it was not seen as an exaggeration either.

Adrian worked his way through the usual schoolboy route of the late 80s/early 90s, living in digs under the watch of a local middle-aged lady, where he shared a house with Robbie Savage for a brief period. He cleaned the boots of senior players and cleaned the dressing room with his fellow apprentices, something that the modern footballer wouldn’t be seen doing. But when it came to the game itself, he was untouchable.

In his book, Forever Young, Oliver Kay speaks with all of those who had played and watched Adrian, which has helped us who were not so lucky to see him understand his ability. Ryan Giggs, who made his debut against Everton in the match where The Doc was also supposed to make his first appearance, has spoken admirably of Adrian. “Destined for a career at the top” and “He could have done anything in football” were two quotes from the Welshman.

Giggs has previously gone as far as to say The Doc was better than him and certainly described him as quicker, giving left backs nightmares. Gary Neville described him as “Out of this world”, whilst Ferguson described him as “Greased Lightning” in some early programme notes. Tony Park, a historian who specialises in Manchester United (particularly the youth setup), described Doherty as a hybrid of Giggs, Ronaldo and Kanchelskis; I acknowledge that Tony Park’s assessment may seem a little far-fetched, but I think this shows the calibre of player that we are talking about. At the age of 16, he was taken on an away match in Southampton with the senior team, as an understudy in case any of the squad were to get injured before the match. As much as Doherty would not get on the bench that day, the intent was there and it showed how much Ferguson and his staff thought of him.

However, whilst The Doc was the star of what was to become the Class of ‘92, off the pitch he was unconventional to say the least, as far as your typical football mad teenager goes anyway. Adrian loved football, but was seen to be at his happiest with a guitar in his hands and writing poetry. He was in a band and went to local gigs in less than desirable bars around Manchester, getting involved in the up and coming Madchester scene. Whilst his fellow apprentices would be smartly dressed for team events, Doherty would be the one to turn up with bed hair looking like he had stolen his dad’s suit. Whenever he was given his complimentary tickets for senior matches, he would give these away to friends and spend Saturday afternoons venturing around Manchester. This wasn’t to say that The Doc saw football as just a job, but rather that he did have other interests outside of the game. He wasn’t interested in the glamourous side of the game, the flash cars, the money, the looks – he simply played because he enjoyed the game and this is what made him a well-liked person around Old Trafford. Even when it came to signing professional terms, he was offered a five-year deal, but asked for a three-year deal as he wasn’t sure if he wanted to play football for that long.

With being on the cusp of a first team debut, Doherty’s life was to take a dramatic turn when an innocuous challenge saw him injure his knee. It wasn’t deemed serious at the time and it was expected that he would be back and challenging for a place again shortly after. But a year later he made his comeback in a reserve match, where his knee buckled again; he never recovered after this. The Doc was released from his contract in 1993 and this has led to some animosity between his family and the club, however, Doherty himself didn’t look back on his footballing career and decided to look forward.

Having worked in several roles in Preston and Galway, Doherty continued to explore his artistic side and live life as he was in Manchester when he wasn’t at the Cliff or Old Trafford. It has been reported that he never mentioned football at all to friends in Galway, with some almost shocked to hear that this was a man who was on the brink of being the next superstar, however, his brother has put on record that he was actually at his happiest during these years.

Doherty moved to The Hague, Netherlands in the late 90s following a job offer from a furniture company. On the day before his 27th birthday, Adrian Doherty’s life was tragically cut short after he had fell into a canal, a reminder of how cruel life can be. The story of Adrian Doherty and this lost genius is one that has only come to light in recent years, but in a world where footballers are becoming harder to relate to us ordinary people, “The Doc” as both a person and player sounds like the refreshing type of character we would gladly welcome back into the game with open arms.