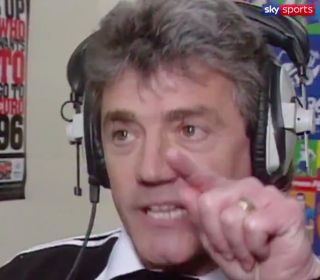 We have all seen Kevin Keegan’s head completely explode after he had become well and truly riled by Sir Alex Ferguson’s mind games.

And what better way is there to commemorate such an iconic moment than on its 24 year anniversary.

Keegan’s Newcastle side had just defeated Leeds 1-0 in April 1996, but it wasn’t the positive result that was on his agenda.

He had, like so many before and after him, fallen into the trap of Fergie’s mind games after the Scot suggested Leeds and Nottingham Forest won’t try as hard against Newcastle as they would against United.

Despite a pleasant start to the interview, Keegan bursted into a fit of rage with plenty of finger pointing as he addressed Ferguson’s comments.

Newcastle squandered a 12 point lead that season in search of the club’s first league title in 69 years, with Ferguson’s United eventually finishing top by four points.

On this day in 1996, Kevin Keegan did this… pic.twitter.com/Adn0znEwTS