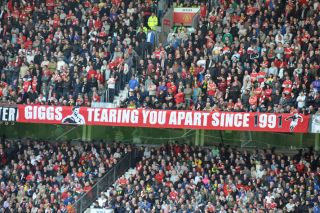 This sounds ridiculous, I know, but Sky Sports could provide fans with the option to listen to recorded crowd noise while watching matches on TV.

The suggestion comes from the Daily Mail amidst claims the Premier League might resume soon with games played behind closed doors as a result of the COVID-19 pandemic.

This is their way to maintain the atmosphere usually captured at Premier League fixtures, even though there will be absolutely none at the games — and it will feel like a competitive training match, if that makes any sense…

Sky Sports and BT Sport are said to be planning to give the choice up to the viewer by making it optional to add artificial noises to the matches they want to watch.

This may be streamed on a separate channel or via the red button.

The format would be similar to what Sky Sports have used for FanZone commentaries in the past (is that still a thing?).

Let’s see if they add some noise to the PA system for the players. It will feel like they’re on a tour of Old Trafford rather than playing the game.

What are your thoughts on this? Would you tune in for some artificial noise? This could be a suggestion in the future for Man City’s televised fixtures — unless they’re playing the famous Man United.

READ MORE: Man United in race for £30m Burnley star who had spell in MUFC academy