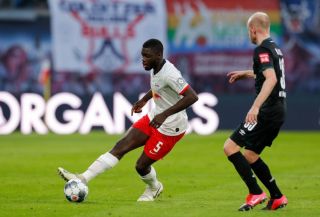 RB Leipzig centre-back Dayot Upamecano has suitors from across Europe, but is now looks unlikely that he will be leaving the Bundesliga outfit anytime soon.

The Metro recently linked the French defender with moves to Manchester United and Arsenal. Reports elsewhere had him down as a target for other clubs such as Real Madrid, as per AS.

However, according to Sky Germany, the highly rated RB Leipzig star will not be going anywhere at the end of the season.

He is understood to have agreed terms on a one-year contract extension until 2022 — containing a buyout clause that will become active in the summer of 2021.

With the COVID-19 pandemic set to negatively impact the transfer window, this is a smart move by Upamecano, to spend at least one more year at RB Leipzig before getting his big move elsewhere.

There are clearly clubs monitoring Upamecano closely and that won’t change because of a new contract.

There’s a defender in the Premier League I would like United to make a move for.

It’s a wildcard option because not everyone will agree and he hasn’t really been named as a target for Ole Gunnar Solskjaer’s side.

But Nathan Ake at Bournemouth would be a very good option —a versatile defender, able to play on the flank as a full-back as well as in the middle — depending on how much the Cherries would demand for his signature.

He could be an option if Solskjaer wants to play three at the back, which worked before the football season was suspended.

Bournemouth have struggled this season but he has been one of their best performers and a move to United would certainly appeal to the 25-year-old.

Eddie Howe’s side currently sit in the relegation zone and could be forced to cash in on their best players if they drop down to the Championship.