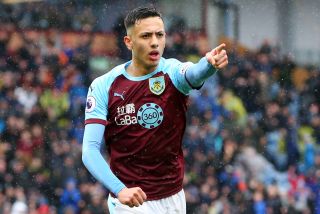 Manchester United are being linked with a move for Burnley’s Dwight McNeil.

The Daily Mail claim United have been monitoring the 20-year-old — but there will be competition for his signature this summer with Crystal Palace and Everton also identifying the England U-21 international as a target.

It is reported that Palace see McNeil as their preferred long-term successor to Wilfried Zaha, who previously failed to make an impression at Old Trafford before returning to the Eagles.

Palace will apparently use the money they received from United for star right-back Aaron Wan-Bissaka last summer.

McNeil has already clocked up more than 50 Premier League appearances and he doesn’t turn 21 until November.

Zaha stayed at Palace even though he wanted to leave, so this was always likely to be his final season at Selhurst Park. It remains to be seen if any club will make an acceptable bid though, and the deflation in the transfer market could see him spend another year at the club…

Burnley manager Sean Dyche has previously tipped McNeil for a full England cap and a move to a bigger club — like United — would certainly help achieve that.

A bigger stage for Gareth Southgate to assess his options for selection.

The Daily Mail notes that the size of transfer fees post-coronavirus remains unclear, but they reckon a player of McNeil’s calibre would usually in excess of £30m.

Manchester Evening News adds that McNeil had a spell in United’s academy.

McNeil is the latest player to be linked with United. We’ll keep an eye on this one.