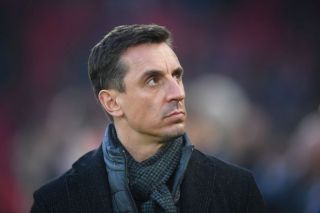 If his own tweets are indeed the truth, then Gary Neville has not seen a film since Braveheart…which was released in 1995. Quite how the Neviller has managed to go twenty-five years without watching a film is beyond me!

Hi anyone got a good film recommendation? My last film was Braveheart so I’m imagining a good one has been released since then!

Honestly, I’m a tad disappointed in our Gary. Unlike the walking monolith to blandness, Michael Owen, Neville is an intelligent, incisive man, so it’s a surprise he hasn’t previously had the intellectual curiosity to settle down for some first rate, visual story telling.

Not to worry though Gazza! I’m combining my loves of cinema and football to recommend you five films released within the last twenty-five years to keep him ticking over while there’s not football on the tellybox.

I couldn’t resist a small dig at Neville’s brief, ill-fated management career in Valencia. Not only is the film title a terrific metaphor for the total lack of preparedness Neville had for the role of Head Honcho at the Mestalla but also a chance for him to brush up on his Spanish language skills. What better film to do it with than Pedro Almadovar’s masterpiece! A bonkers and transgressive murder mystery and an introduction to a totem of post-Franco Spanish culture.

While I appreciate this is three films and technically cheating, this is my list and I can do whatever I like. A three stage, epic story with the “precious” and a quest for everlasting glory? Yes, it is an extremely tenuous metaphor for the treble season of 1998-99. Gary can be the Samwise to David Beckham’s Frodo Baggins, with the latter’s departure to Undying Lands allegory for Becks’ transfer to Real Madrid. A twisted, dour Graeme Souness would also make a terrific Gollum.

Mine GIF from Mad GIFs

As Neville has become more politically outspoken in recent months, launching a few incisive broadsides at racism in Britain and the government’s response to the Coronavirus pandemic, I can’t recommend Ken Loach’s Palme d’Or winning film enough. Loach’s heart-breaking film detailing the callous bureaucracy of the last decade’s welfare reforms. A fabulous piece of work for Neville to familiarise himself with on a cause that is still as prescient as ever.

They may be no immediately obvious connection between Neville and Martin Lawrence donning a fat suit for a god awful, tin-eared comedy. However, seeing as Neville went all-in accusing Romelu Lukaku of eating all the pies, he can be made to sit through this complete tripe as an ironic punishment devised in the bowls of hell.

Gary! This film is magnificent. I’ll pay you five whole UK Pound Sterling to watch this film, then publicly eviscerate Michael Owen on TV for saying it’s “not great.” Robert De Niro and Al Pacino directed by Michael Mann. This is the film equivalent of having Maradona vs Cruyff play against each other at their peak!