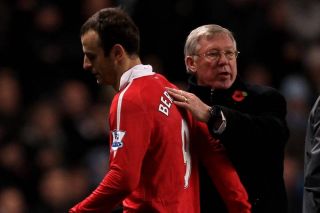 Former Manchester United striker Dimitar Berbatov said he was “shocked” to learn that he was excluded for the 2011 Champions League final against Barcelona.

Speaking to talkSPORT, the Bulgarian said: “It was just before the game, he [Sir Alex Ferguson] called me and said ‘Berbs, it’s killing me, but I need to leave you out.’

“So it was like that and it was painful to hear that because I was a goalscorer of the team and of the Premier League.

“I was surprised because I felt so confident if I can shoot from somewhere, it’s going to go in.

“So that was a surprise for me, but in the end, it was like that,” he concluded.

Ferguson decided to drop Berbatov as he endured a seven-game barren spell in front of goal in Europe — so Wayne Rooney was partnered up front with Javier Hernandez.

United lost the Wembley final 3-1, with Michael Owen named on the bench.

In an interview with MUTV, Fergie previously expressed his regret at dropping Berbatov.

He said (via The Metro): “At Wembley, I dropped Dimitar Berbatov and he took it badly.

“He didn’t deserve it. No player deserves to be left out of the final. That’s why we try hard at these European seminars with the arches to try to get 11 subs in the final.”

That has to be one of the toughest elements of being a football manager — when you reach a final — having to drop players.

But with a seven-game barren spell in Europe, Fergie can regret his decision all he likes but it wouldn’t have made any difference.

Barcelona were way better than United and gave us a bit of a lesson on the pitch.

Berbatov was a class act and you can understand why he’d be upset at missing out on a Champions League final.

After joining United in 2008, Berbatov left in 2011 to sign for Fulham where he spent two seasons.

He retired in 2018 at Karala Blasters, a club based in India.