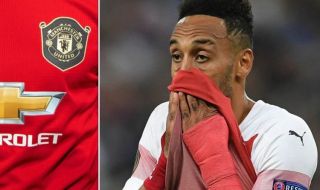 I caught up with Arsenal fan and Caught Offside editor Mark Brus (@mbrus88) to get his thoughts on Pierre-Emerick Aubameyang potentially leaving the Gunners this summer.

Like so many players to join the Gunners in recent history, Aubameyang was promised Premier League stardom but now he wants more. You will all remember Robin van Persie being in a similar situation before moving to United and winning his first and only Premier League title.

So many years wasted in London. And now it looks to be the case with Aubameyang, 30, with reports linking him to Inter Milan and Barcelona.

But why don’t United wiggle their way in and give Aubameyang another option? He wants Champions League and there’s still a chance we could quality for that, if the remainder of the season is played.

Grab a brew and read through our conversation with Mark.

Pierre-Emerick Aubameyang left a lot of Borussia Dortmund fans unhappy before leaving for Arsenal. There were flirtations with other clubs and clashes with the hierarchy. Do you think he’d leave for one of Arsenal’s rivals — United or Chelsea — as long as one of them secure Champions League football?

I think it’s clear at this point that he wants to leave, as he’s had more than enough time to sort his contract situation out. Whether he’d join United or Chelsea is less certain – he’s spoken before about wanting to play in Spain before he retires and I think he’ll have his eye on what could be his last chance of a truly big move before he’s career’s done. Both Real Madrid and Barcelona could do with a striker, so my instinct says he’ll end up at one of those if he does move on.

Before the UK went into lockdown, Mikel Arteta set out to do everything he could to keep the Gabon international at the Emirates. How much of a blow will it be to him if his star striker jumps ship?

Losing Aubameyang would be a huge blow – given the state of the rest of our team he’s arguably a more important player for us than even Thierry Henry, Robin van Persie or Alexis Sanchez ever were. If you took away his goals for us this season we’d most likely be in the relegation zone. How we replace someone like that without spending a fortune is beyond me.

If you could sign a Premier League striker to replace Aubameyang, who would it be?

Sergio Aguero would be nice but is obviously not realistic! In terms of someone we could actually sign, Raul Jimenez has looked really impressive for Wolves, so would probably be our best bet in terms of bringing someone in who’s proven in the Premier League.

Thoughts on the £30m price reportedly set for Aubameyang?

£30m is a ridiculous price tag and, if true, I hope we just keep him for the final year of his contract. There’s really not much we can do with that money and I’d rather keep the 25-30 goals a season. If we allow a rival like United or Chelsea to sign such a top player for so cheap then we deserve everything coming to us.

Finally, the most important question of all: Would Aubameyang come to Old Trafford and be a Robin van Persie or Alexis Sanchez?

Much as I rate Aubameyang, I do think there’s a risk of United repeating their Alexis Sanchez error if they sign him. He turns 31 this June and that pace he relies on to beat defences will soon start to diminish. That said, I also think a big part of the Sanchez problem was him joining a dysfunctional and demoralised Mourinho team, whereas Aubameyang looks a better fit for the kind of team Solskjaer is putting together.