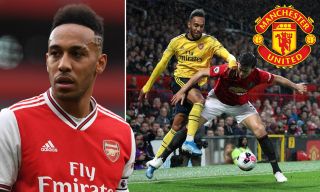 Manchester United have been linked with a number of strikers over the past year as Ole Gunnar Solskjaer clearly looks to bring in a goalscorer to replace Romelu Lukaku after the Belgian’s departure almost one-year ago.

Marcus Rashford has improved massively this term but looks still best on the left flank, and it’s a huge shame the current campaign came to a halt because Anthony Martial was starting to score goals for fun following Odion Ighalo’s arrival from Shanghai Shenhua on loan.

The strikers linked most regularly are Moussa Dembele, Timo Werner and Erling Haaland.

I would not put my nose up at any of those strikers, but there are two more whom the media deem available when the transfer window reopens. They are AS Monaco front man Wissam Ben Yedder and Arsenal’s Pierre-Emerick Aubameyang.

According to French news outlet L’Equipe, Manchester United are keen on signing Yedder.

But there’s a catch…

The report also says there is interest from Man City, Tottenham Hotspur, Liverpool and Arsenal — along with a host of La Liga clubs trying to bring him back to Spain where he was successful with Sevilla.

This season he has scored 18 goals for the Ligue 1 side and with a reported £40m price tag, United could do a lot worse than sign Ben Yedder.

Meanwhile, I think we’d be stupid not to make a move for Aubameyang.

Arsenal are resigned to losing the Gabon international this summer and have placed a £30m price tag on his name, as per The Sun.

He’s 30 now so there will be no sell-on value. He is also one of Arsenal’s highest earners and probably would cost around £60m if he was not close to the end of his contract.

This will be exciting news for the likes of Barcelona, who have also been linked with a move for the player, but Unite should be bold and make an effort to sign the Arsenal man.

Imagine Jadon Sancho and Aubameyang joining Rashford or Martial in United’s attack next season? That would be tasty.

United still have Ighalo and there will be talks about his future in the coming weeks.