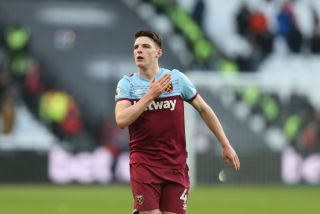 West Ham are preparing to sell some of their players this summer after coming to terms with struggles as a result of the coronavirus pandemic.

That’s according to The Sun, stating that ‘nobody is safe’ from being sold at the London Stadium, and let’s not forget how David Moyes became a fruit and veg driver in Scotland.

While the Hammers haven’t been very good this season that hasn’t stopped Declan Rice from earning praise and picking up his first England cap earlier in 2019, earning six more since.

We could do more to dress up a move for Rice and make him sound more appealing, but I think a move for the England international would be a waste of time.

The sound of a more physical and robust type holding midfield may appeal to you, as it does for me, but not at the price of £70m.

I’m not saying forget a holding midfielder this summer and throw Nemanja Matic in again because he was decent before the campaign was brought to a halt, but you could probably get Atletico Madrid’s Thomas Partey or Leicester City’s Wilfred Ndidi for cheaper!

Ole Gunnar Solskjaer could also dive into the transfer market and find a younger midfielder who hasn’t been found by a club in one of the top five leagues in Europe?

Football is about being ahead of the curve.

And right now, with financial implications already hitting the sporting world, spending £70m on Declan Rice would be ridiculous.