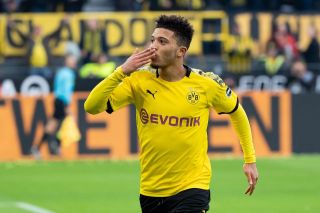 Hello and welcome back to Rowlesy’s Ramblings.

Every Monday morning, you lucky lot will have the opportunity to wake up to my take on various Manchester United stories from the week. The gut-wrenching lack of football matches to report on has left a lot of room for stories to interpret, and I hope you will enjoy reading my views as much as I will presenting them to you.

So, without further ado, let’s get right into it. And there’s seemingly only one place to start…

I have seen countless amounts of speculation that Jadon Sancho, Borussia Dortmund’s prized winger, will spurn a move to Manchester United in the next transfer window if they do not qualify for next season’s Champions League.

Whilst there is a possibility that Sancho could well reject United in any case, I do not believe Europe’s top competition is the deciding factor.

United’s interest in Sancho goes back to his Manchester City days and the word was Sancho was keen on exploring a move to Old Trafford last summer when, as we know, United did not secure Champions League football.

My understanding of the Sancho rumours is that the totality of the evidence will be studied by Sancho’s party before deciding where his future lies.

That would include the money, ambition of the prospective buyer, where he fits into the team’s system and the overall project.

United can present a plethora of incentives Sancho’s way, logic would dictate a guaranteed starting berth on United’s right-wing, a handsome salary far exceeding what Dortmund can offer, the iconic number 7 shirt and the chance to be part of a potentially explosive triumvirate with close mate Marcus Rashford and Anthony Martial.

Talk will naturally intensify once/if it is safe for the season to resume so it will be a case of wait and see, but the rumour of Champions League football being the be all and end all for Jadon Sancho, in my opinion, is unfounded.

Believe it or not, Ed Woodward gets it right

That was an inopportune moment to sip your coffee in between topics and I hope there was no choking or spillages, but yes you read that correctly, Ed Woodward has got something absolutely spot on…

To downplay the prospect of multi million pound deals was interpreted by many as using COVID-19 as the ideal excuse from the Glazers to rein in spending and that the Jadon Sancho deal was off the table. The proof will ultimately be in the pudding, but I feel that reaction will be misguided. The next window will turn out to be a buyer’s market and United’s financial prowess effectively immunises them from any ill after effects of COVID-19.

Woodward’s warning was needed to be said and not directed at the Sancho deal, in my eyes. Rather, the ludicrous links with Harry Kane for £150-£200 million. In what fantasy land is Daniel Levy living on? This is a guy who initially furloughed his non-playing staff. Forget about it!

It’s not solely associated with Kane, though. This has stemmed from years of United paying ridiculous premiums no other team gets quoted. Admittedly, Woodward has not been totally blameless with previous quotes that United can do things in the market others can only dream of, but his stand now is equally admirable and logical.

Woodward’s quotes, to my mind, were nothing but purely strategic, which could ultimately give United a very strong hand when the market re-opens. Putting every unfortunate consequence of the pandemic to one side, football will eventually go on and teams could be forced to sell and bargains could be there to be had.

The question is, do United take the moral quandary head on and, to quote Gary Neville and Solskjaer, ‘exploit’ the market? United want to get back to the top, so they have a huge opportunity here and I think it will be taken.

In the meantime, Ed Woodward has come up trumps, who’d have thought it?

How do you solve the Alexis Sanchez problem?

If there was no choking or spillages of coffee in lauding Ed Woodward, maybe the next sentence enhances those risks …

If Alexis Sanchez sees out his United contract, terminating on 30th June 2022, he stands to earn a staggering £45.2 million. Best case scenario, that’s taking a minimum £400,000 per week salary over the course of the remaining 113 weeks. It could even be more.

What on earth can United do with their flop?

We were hoping a return to Serie A, after coming to prominence in Europe with Udinese, would see some sort of reigniting of his career and lead to a permanent exit. The truth is, he has not delivered there either.

Before people visit the possibility of him coming back into the fold now United’s camp looks a lot rosier than 12 months ago, let’s remember Solskjaer offered him an olive branch last summer before Sanchez duly threw that back in Ole’s face by requesting a move.

For me, that ship has sailed.

Sanchez’s return will rock the boat, this wash up is United’s costliest player. No one in their right mind would take the gamble on Sanchez, would they?

What is the answer? Severance package? It seems incredibly unlikely, with all that’s going on. Sell him? See above. To whom exactly? China? America? Even if those doors are slightly ajar, Sanchez would have to want a move of that kind – effectively digging his own footballing grave.

My gut feeling is that, similar to this season, another loan deal with United paying a vast proportion of his scandalous salary is the only feasible way forward for both parties.

I won’t lie, I was excited when Sanchez was announced a United player. Hindsight though tells me that trying to get one over City and imagining this Utopia where Sanchez scores 20 off the left-wing, leading us to a title, was incredibly ill placed.

Still, to this recent past, quotes emerge from the bitter mouth of David Moyes about his disastrous spell in charge of United. From banning bacon butties and chips to having extreme delusions of grandeur in courting Bale, Fabregas, Kroos and Ronaldo among others, we are still being harrowingly reminded of how bleak it was under the man supposedly ‘cut from the same cloth’ as Sir Alex Ferguson.

Surely it was one of the biggest aberrations in Manchester United’s recent history to allow Ferguson to effectively bypass any footballing due diligence in choosing Moyes as his successor. Yes, the silverware he afforded us has shaped a great part of our lives, but did not entitle him to offer his close ally and supposed ‘safe pair of hands’ the chance to fill the biggest shoes left in world football, arguably ever.

Jose Mourinho was readily available and yearning for the United job. I wanted him then and I stand by my belief that 2013 had to be the time to employ Mourinho, it came 4 years too late.

You cannot harbour any resentment towards Moyes for taking the job, I bet he could not believe his luck, after all his Everton sides were, on the whole, pragmatic and functional. From the footballing side at United under Moyes, that pragmatism and functionality were transferred from Merseyside and anyone will tell you that is not in keeping with what is required to make the grade at United. Louis Van Gaal, even with his CV, can vouch for that too. I lost count of the times United would sit back on a 1-0 lead to eventually pay the ultimate price of a late equaliser under Moyes.

It was always going to be hard for whoever came in straight after Ferguson, 26 years of hegemony and iron fist ruling cannot be immediately wiped from the memory or modified in the blink of an eye. But, whether it was the cringeworthy ‘Chosen One’ banner to transfer negligence to unacceptable results on the pitch, there are very few sympathetic shoulders for David Moyes to cry on about his 9 months in charge of United.

Let’s face it, he hasn’t exactly pulled up trees after United.

I just wanted to take this opportunity to hope that everyone reading stays safe and healthy in this awful time. At the time of writing, my girlfriend is entering the last day of her 7 day isolation, despite not being able to get tested for COVID-19 and the fact she is a key worker as a nurse.

As a result, I am in the middle of a two-week isolation period, but it really is to emphasise the importance of social distancing and abiding by the governmental guidance.

Football is a huge void to many but it will be back. I’m sure if there was no break, United would have made the top four one way or another, and they still might, but it does pale into insignificance at this current moment and has given a lot of us some much-needed perspective about what is truly important.

Stay safe everyone and have a good week!