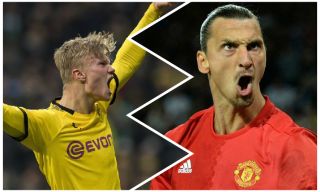 Manchester United fans will be pleased to hear that Erling Haaland has picked out two former Red Devils Zlatan Ibrahimovic and Cristiano Ronaldo as his footballing heroes when growing up.

Speaking to Borussia Dortmund’s YouTube channel, the Norwegian striker said (via Manchester Evening News): “My biggest idol as a child, I had a lot of good players [to look up to].

“From Zlatan [Ibrahimovic] to [Cristiano] Ronaldo, to this kind of guys. I cannot say one, so I’ll say to: Cristiano Ronaldo and Zlatan Ibrahimovic.”

Haaland was one of the players recently targeted by United, with Ole Gunnar Solskjaer clearly keeping track of the young striker who signed at Molde, but he decided to opt for Borussia Dortmund instead.

Depending on who you talk to, the version of events from those negotiations wary — from United pulling out of a buyout clause and whatever Mino Raiola wants you to believe.

ESPN claims United will be ready to rival Real Madrid for Haaland if the Norwegian wishes to leave Dortmund anytime soon.

But that’s unlikely, especially now with the financial impact COVID-19 is going to have on football clubs, unless Dortmund shock us all and sell everyone which won’t happen either.

United’s priority seems to be Jadon Sancho, Haaland’s team-mate at BVB, and with the ex-Molde forward only after joining the Bundesliga outfit, he needs to give himself time to make an ever-lasting impression on German football.

This season — for Red Bull Salzburg and Borussia Dortmund — Haaland has managed 40 goals in 33 appearances.

We could be talking about football’s next best player.