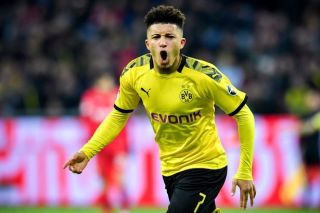 Borussia Dortmund chief Michel Zorc is relaxed about Jadon Sancho’s future at the club despite major interest from Manchester United.

The England international has been linked with moves to several top European clubs, but with the COVID-19 pandemic set to have negative impacts on club’s spending in the upcoming transfer market, United could be the only option for Sancho unless he stays put at Dortmund.

Speaking to Sport1 about the 20-year-old winger, Zorc said (via Daily Star): “There is no new stance. At the moment, all clubs are running on sight — even in England!

“I cannot and do not want to lean too far out of the window with forecasts because the situation is changing daily. We will see what happens.

“We have a long-term contract with Jadon Sancho. This will not change now. We are totally relaxed about it.

“The most important issues that are currently occupying us are rather: what is the way forward? When do we play again?”

Sancho is a player we would love to have at United next season. He’d help transform our attack with the right-side currently lacking a top class operator of his ability.

This is the type of player who can lift bums off seats at Old Trafford. A spark in the final third.

We believe United are leading the race to sign Sancho, as reported by the Daily Mail, but Ed Woodward has warned the media about speculating over the value of individual transfer targets.

Dortmund sound confident in their ability to keep the Englishman at the club — unless their transfer demands are met.