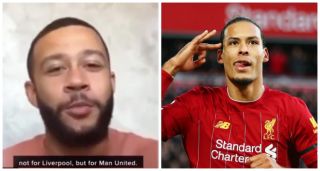 It comes with a cheeky twist too, as Depay is seen praising Van Dijk for his hard work and impact on the Premier League in general, but adding: “I wish you signed man… Not for Liverpool but for Man Utd.”

Stick to the football, Memphis…

Van Dijk is the best defender in the Premier League, so Depay has done his bit to annoy Liverpool supporters who couldn’t imagine their star man from the back playing for their rivals.

He narrowly missed out on the Ballon d’Or award to Lionel Messi which speaks volumes about his presence on the pitch.

It’s a shame Depay didn’t work out at United because he seems to have enjoyed his time at the club, sharing pictures since in retro United shirts, and rapping about the Premier League’s best defender playing for the Red Devils as opposed to his actual club Liverpool.

Known for his ability to cut inside, dribbling, distance shooting and ability to play the ball off the ground, Depay is still playing for Lyon but interestingly was linked with a move to Anfield last summer.

We take it he has no interest in joining that lot after all.