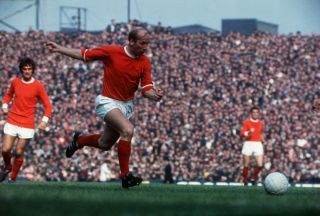 Manchester United held an online poll to allow fans to decide who the club’s greatest-ever English is and Sir Bobby Charlton won with a fine margin.

The United legend, who carried on playing for the club after the Munich Air Disaster, was successful on the international stage winning the 1966 World Cup with his elder brother Jack in the same England team.

He managed to clinch 35% of the votes to win this accolade, while Wayne Rooney, who surpassed Sir Bobby’s goalscoring records for both United and England came second.

Paul Scholes comes third which is deserving even though he got the appreciation he deserved for England.

Former United defender and two-time Champions League-winner Wes Brown stated his own support for the midfielder, saying, “It’s a tough one but I’m going with Bobby Charlton. For what he’s done in the past and obviously watching stuff when I was growing up on video. What he did — not just for club but for country as well — means I’ll go with Bobby. We’ve all met him and he’s an absolute top man.”

Fellow defender David May said: What he came through – Munich, then winning the European Cup, winning the World Cup, being a club ambassador. In these times, I think he is the perfect gentleman to get that accolade.

Danny Webber agreed, adding: For personal reasons as well. When I was a kid coming through, the boss introduced me to him and Sir Matt Busby and I remember being in awe of him and thinking ‘wow’. For me, Sir Bobby is an absolute legend.

Charlton was one of the Busby Babes and he went on not only to become a top ambassador of Manchester United, but his close affiliation with Sir Matt Busby remained and he also worked closely with Sir Alex Ferguson.

He was part of United’s first European Cup-winning team in 1968, 10-years on from the Munich tragedy, and scored 249 goals in 758 appearances for the Red Devils.