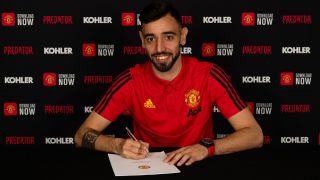 It looks like Sporting Lisbon may have to wait for a long time to receive the amount due for Bruno Fernandes’ transfer to Manchester United, as revealed in a recent O Jogo report.

Both clubs came to an agreement in January which say the playmaker move to Old Trafford for €55m — with additional bonus payments as well.

While Sporting wanted the money up front, United wanted to do the deal over yearly instalments over the course of a four-year period.

Seeking advice to finance a deal and achieve a middle ground, the clubs turned to a German bank that would transfer the money to Sporting for a small fee and recover the instalments from United in the meantime.

It seemed very straight forward, at the time…

Since negotiations between United and Sporting went on for much of January, there has been a delay, and the coronavirus pandemic has only worsened the situation.

It is reported that the bank in question is now unwilling to take such a high risk, and is only open to transferring only half of the money to Sporting.

How many other clubs will suffer from this?

We haven’t even given it any thought when discussing how clubs would operate in the transfer window, and it’s significant!

It’s another method clubs will probably avoid using in the future.