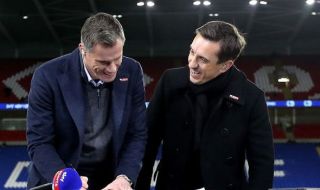 Gary Neville and Jamie Carragher always have something to argue about, but the former Manchester United captain has claimed that the ‘desperation’ of teams at the top is ‘equally as nauseating’.

The desperation of teams at the top is equally nauseating as the noises from the teams at the bottom! https://t.co/GOvv9N66sS

This was in response to a column Carragher did for The Telegraph. He stated that even if no more matches can be played — sides still need to be promoted and relegated, despite the protections from bottom teams.

Yesterday I was reading a piece from L’Equipe about 23-year-old Montpellier midfielder Junior Sambia being in an intensive care unit with digestive and respiratory problems, described as COVID-19-like symptoms.

The midfielder was initially admitted to hospital on Monday morning with concerning symptoms. L’Equipe have ran an update with quotes from Sambia’s agent Frederic Guerra (via Get French Football News):

“I have news from Bruno Carotti, who keeps me informed by the minute with everything that is happening, through the club doctor. I want to thank them because thanks to them, I am also creating a line of communication with the family. At the moment we are speaking, they have stopped with the anaesthetic products to see if he is able to breathe on his own. But we don’t yet have the results because he is in the process of waking up. That in itself is already good news.”

The point I am making is how can we talk about football returning if it’s not safe — behind closed doors or not?

Each country is different, I understand that, and the Bundesliga is starting back on May 9, behind closed doors in controlled circumstances — but it’s too early to call for the Premier League to come back in a similar manner.

The German authorities needs to be fully sure they are doing the right thing. As this story tells, footballers can get COVID-19 too.

Carragher issued his response to Neville, as seen below:

There is no noise from the top that’s the point! They would be accused of being insensitive but clubs near the bottom are quite public on it. Thanks for the concern for the family! https://t.co/WTBSzZliCd

For more from Stretty News, check out the following links: Podcast | YouTube | Patreon