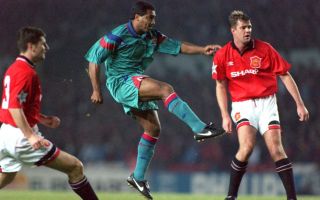 While everyone talks about the way in which a Romario-inspired Barcelona tore Manchester United to ribbons in the Camp Nou, we think the less said about that the better, so Dale and Mike rewatched the home game between the sides which was a much tighter affair.

The La Liga giants responded with Romario netting the equaliser while Jose Mari Bakero popped up to give them the lead shortly after the break.

It looked like United could be in serious trouble until Lee Sharpe popped up with a moment of magic, back-heeling a late leveler after a low cross from Roy Keane.

Listen to our podcast below — or alternatively on Apple Podcasts & Spotify:

To support the Strettycast cast become a Patreon.