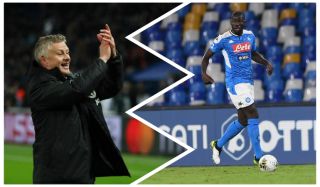 Ole Gunnar Solskjaer is a long-term admirer of the Senegalese international, who has established himself as one of Europe’s elite central defenders in his six years in Naples.

However, while Solskjaer rates Koulibaly very highly, he is not seen as a priority transfer target in the summer transfer window.

As reported by Manchester Evening News, he is not seemed an essential target and would be more of a luxury addition.

Koulibaly turns 29 in June and Solskjaer is opting for younger players as he looks to accelerate his rebuild at Old Trafford.

Instead, the United boss is focusing on improving in attack with the Reds still short on goals despite an impressive unbeaten run before the coronavirus outbreak.

Sancho is one of the most coveted young players in Europe and his signature would represent a huge coup for Solskjaer who would be able to field one of the most dangerous front threes in world football with Marcus Rashford and Anthony Martial.

Grealish, meanwhile, has been totemic in Villa’s survival bid this term and could be an attractive versatile attacking option for Solskjaer next season.