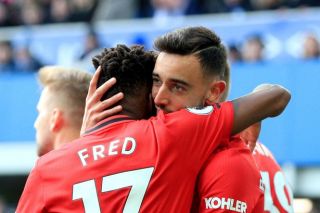 The signing of Bruno Fernandes ignited Ole Gunnar Solskjaer’s Manchester United and promised a better future for the club before the COVID-19 outbreak postponed the team’s steady progress.

However, most United fans acknowledged that the progress made was still not enough to make the Red Devils Premier League champions, which is the level that should be aspired to.

Questions remain around Paul Pogba’s future at United, and whether he is still the player that could take Solskjaer’s midfield to the next level. Whether or not he is, players are likely to join to augment the side’s midfield this summer and help reinstate United at the top of the Premier League.

Whether in a 4-2-3-1 or 3-5-2, Solskjaer’s midfield this season has consisted of two holding midfielders behind a more attacking player, much like the formations he deployed while at Molde. In this setup, Fred, Scott McTominay and Nemanja Matic have been the main holding players, with Andreas Pereira and Jesse Lingard struggling in the attacking role before Bruno Fernandes’ arrival.

After much consideration, I believe this should remain the same next campaign, as the formation has brought the best out of all three deeper players, as well as new man Fernandes.

The alternative formation, a 4-3-3 with one holding midfielder and two flanking box-to-box players, led to many struggles for Fred in particular. Playing as the holding midfielder, Fred had little freedom to roam from his position and press the opposition, a strength of his, while further forward, his limitations in possession were exposed and he was often found too far wide.

It is no coincidence that Solskjaer’s formation change has led to the best campaign of Fred’s career, with many calling for him to be named United’s Player of the Season. A double-pivot allows Fred to roam from his position and win tackles, before carrying the ball into dangerous areas from deep.

McTominay, similarly, has had his best season since being promoted to the first team by Jose Mourinho. A player whose attacking contributions largely revolve around appearing outside the 18-yard box and striking the ball, McTominay offered little creativity as an advanced midfielder in a 4-3-3, but was more restricted in the defensive role.

Matic, the only true defensive midfielder in the side, is better suited to the 4-3-3 in theory, but every great season in his career has been in a two-man midfield. Whether his partner was Cesc Fabregas, N’Golo Kante, Paul Pogba, or in his recent purple patch, Fred, the Serbian international is under less pressure to constantly move the ball forward in a double pivot.

Finally, while Fernandes played primarily on the right side of a 4-3-3 midfield at Sporting, playing as the advanced playmaker in a 4-2-3-1 has led to a prolific partnership with Anthony Martial. Fernandes has 2 goals and 3 assists in just five Premier League matches for United from attacking midfield. Based on that match-winning record alone, it would be ridiculous to alter his role.

Proponents of the three-man midfield likely would cite Paul Pogba’s time at Juventus and earlier days at United, but his monumental performances for France in the World Cup were alongside Kante as a deeper playmaker.

It seemed that Solskjaer’s plan for the campaign was to play Pogba in the pivot of a 4-2-3-1, given that the midfielder started there five times before his early-season injury, even though the manager’s options for attacking midfield were dire before Fernandes’ arrival. Lingard and Pereira would be lucky to be at United next season, to say the least.

From the current crop of midfielders, Fernandes is the clear starter in the side, given the fee and form with which he has joined United. However, given Lingard and Pereira’s abhorrent form this season, Juan Mata’s lack of suitability for Solskjaer’s pressing system, and the likelihood that academy prospect Angel Gomes will leave the club this summer, a signing will be needed to offer depth in attacking midfield.

This brings credence to the rumours linking Jack Grealish to the club, as per The Busby Babe. While he could cost up to £60 million, it makes perfect sense for United to sign Grealish. A player far too good to be relegated to the Championship, he will almost certainly be seeking a move as Aston Villa flirt with the relegation zone.

Grealish offers the quality United would need in Fernandes’ absence, and his versatility ensures that he will play more than enough football to advance his career at United. Whether deputising Fernandes, Marcus Rashford on the left, or even at right-wing, Grealish will be able to play at least 30 matches this season simply by deputising for other players.

If Pogba were to stay, he commands a starting role in defensive midfield. The Frenchman would slot in directly for Fred and offer significantly better dribbling, while his expansive passing range would further the impact of United’s counter-attacking football. With a player of Fred’s calibre around for rotation, United can keep Pogba on his toes and replace him properly in his absence. Pogba is not a defensive midfielder, though, giving rise to the need for a proper holding midfielder to play alongside him.

Fred is not that player, and Matic cannot play a full season of football anymore, leaving McTominay to play alongside Pogba for most matches. Concerns remain as to whether McTominay is an elite defensive player like Matic, though; before McTominay’s injury this season, Fred and McTominay started together in 10 of the 11 consecutive Premier League matches in which United failed to keep clean sheets, while after, United kept 7 clean sheets in the next 9 fixtures.

In my opinion, if United are to compete for the Premier League and Champions League next season,  a proper destroyer needs to join, which explains links to 26-year-old Atletico Madrid midfielder Thomas Partey, according to Squawka. Reports indicate that his release clause could be as low as £42 million, a modest fee for a world class footballer whose best years are ahead of him.

Partey has become one of Europe’s hottest commodities due to his incredibly well-rounded style, combining destructive midfield play with progressive passing and dribbling. From Diego Simeone’s two-man midfield, Partey averaged 3.6 tackles per game while completing a remarkable 61.6 passes in the Champions League, capping off a remarkable campaign with a stunning performance to knock Liverpool out of the competition.

The player has made it unclear whether he wants to leave Atletico, and even if he did, he may still choose to pursue interest from other clubs, including Arsenal. In that event, United could also turn to Wilfred Ndidi, who has been the best destroyer in England for a few years now.

Ndidi is a pure defensive midfielder, but the best player on the planet at what he does, as evidenced by the 4 tackles and 2.7 interceptions that he has averaged for Leicester this season. He would allow Pogba and Fernandes the type of freedom they need to perform among the best creators in England, and at the age of just 23, he can only improve.

Ndidi is likely to be at least double the price of Partey, and with outlets like the Manchester Evening News reporting rumours of Jadon Sancho joining this summer, United are unlikely to spend a record-breaking fee on another player.

The most likely objective for Solskjaer and Ed Woodward is to have Thomas Partey starting alongside Pogba and behind Fernandes for United next season. This ideal scenario would allow the team to have excellent squad depth in the form of Matic, McTominay, Fred, and perhaps Jack Grealish.

However, there are many other scenarios that could still result in United having an excellent midfield; should Pogba want to leave, Fred remains an excellent option for Solskjaer, while Wilfred Ndidi could be an even better signing for United than Partey if he joined.

Most importantly, though, Solskjaer needs to retain the shape that brought the side stability and progress before the COVID-19 outbreak postponed the season. United have lacked stability for many years, and before the outbreak, United fans saw glimpses of the first Old Trafford side in a while that could consistently win matches from midfield.

Achieving improvement and longevity upon that base would be the foundation for the rest of Solskjaer’s United tenure.