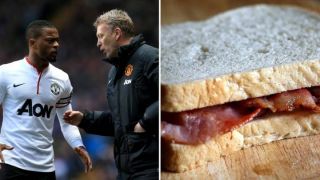 You only need to follow Patrice Evra on social media to know he’s crazy!

According to the Manchester Evening News, the former Manchester United star chose a bacon sandwich as his weapon in an attempt to defy then-manager David Moyes.

The Frenchman was left unhappy about Moyes’ strict dietary principles.

Moyes gave the squad instructions to avoid helping themselves to the complimentary buffet during an away trip, and that did not sit well with Evra.

So the former left-back devoured a bacon sandwich in front of Moyes.

It didn’t end there.

Evra went on to sarcastically announce that bacon and sausage rolls would be available for the passengers on the plane, following his request to the pilot!

This further shows that Moyes was a shocking appointment – because not in a million years would Evra have done this to Sir Alex Ferguson.

The players should never be bigger than the manager but Moyes was a small fish in a big pond and he stood no chance.