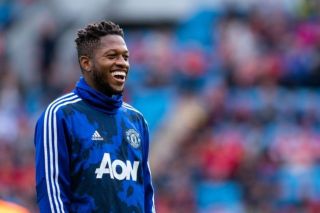 Manchester United midfielder Fred has named James Garner as the most impressive young player at the club.

Brandon Williams and Mason Greenwood have been the breakthrough academy stars in Ole Gunnar Solskjaer’s first-team this season.

Garner has made just three first-team starts this season, all coming in the Europa League group stages.

Meanwhile, Williams and Greenwood have established themselves as regulars within Solskjaer’s squad at a similar age.

Fred has praised the pair, but picked out Garner for a special mention and explained what he admires so much about the 19-year-old.

“They are great players,” he told Trivela, when asked about Greenwood and Williams.

“The club has an important role in using many academy players, it has this history of using the kids that come up from the academy, it makes history at the club, and this process is important. They are great players, with a lot of potential for the future. All are very good, they are not in the first-team for nothing.

“But what impresses me most is James Garner.

“Not because he is in the same position as me, but he is a player who has an impressive vision of the game, has a huge future for United.

“In addition to the impressive game vision, he always plays with his head up, has an impressive shot, an incredible pass. He is a player that I admire a lot.”

Garner will be understandably frustrated at a lack of first-team opportunities given his excellent performances in Neil Wood’s u23 development side.

The youngster has everything to his game and has proven he has outgrown age group football this term.

While he has not yet burst onto the scene in the same vain as some of his academy teammates, he should take encouragement in the fact there remains a path to the first-team with Solskjaer as manager.

Greenwood has scored 12 goals for the Reds this term and Williams has made 18 starts since his debut in September.

Perhaps Garner would benefit from a loan spell in the Championship or a lower Premier League team next season to gain vital regular game time and experience.