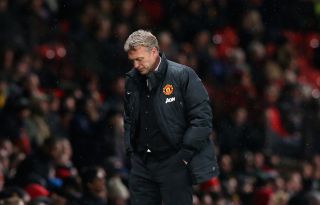 David Moyes was handed a six-year contract when he was appointed Manchester United manager in 2013, but less than 10 months into the job he was axed on April 22, 2014.

Succeeding Sir Alex Ferguson was never going to be an easy job — but replacing the greatest manager of all-time with someone who won nothing in their previous job was a big mistake. One you could see coming from the minute he was appointed.

Up first, it is Matthew Henderson – arguing that United were right to sack Moyes six years ago.

When the bullet was fired, it wasn’t a surprise to anyone. Sir Alex had left the reins in the hands of a man whose career highlights to date had been Tim Cahill, and not getting promoted with Preston, and this had shown itself through the season as Manchester United defended their title by rolling over and dying a sorry death. David Moyes came and went in record time, and though the aftermath may not be pretty, I thank heavens he was sacked when he was.

This sounds like a personal vendetta against the man, and I assure you it is not. Moyes’ first picture sat in that office chair, smile as wide as the Cheshire Cat’s, is almost exactly how I would look if given this opportunity. He had the best intentions, he knew the magnitude of the job and the expectations, he probably had more faith in a new executive than he received in return and he certainly had faith in himself. But one problem came with him and never left; he wasn’t good enough to succeed.

Moyes was good at Preston, hence him moving up to Everton, and it would be unfair to him to diminish any of his achievements at the Toffees which included procuring European football and reaching the F.A Cup final, but these are not the requisites for a Manchester United manager. His record after his fateful spell at United only further prove his ability would be questioned fairly. He failed in Spain at Sociedad – lasting just a year, he was relegated at Sunderland before his first spell at West Ham that did yield some positivity for him finally. But the evidence at United is obviously the more relevant.

People say Moyes deserved more time, I say remember Fulham and the crosses? I say worst ever start to a Premier League season. I say 4-1 defeat against City and losing 2-1 at home to West Brom. It was an ageing squad, granted, it was a squad that needed additions, yes, but it was a squad that had just won the League at a canter. Full of internationals with the likes of Wayne Rooney, David de Gea, Michael Carrick and Robin van Persie. He lost back-to-back home games against Newcastle and Everton, the first time this had happened since 2001/02, he lost to Sunderland in the League Cup, and convincingly to City and Liverpool in consecutive games. 9th in December, when Moyes left United they were sitting 7th, 13 points behind 4th place. And let’s not forget his aspirations to be Manchester City one day, a club made successful only by way of a rich, oil-funded owner.

The shortest managerial stint in Manchester United history is so because it was deserved. Nothing about Moyes screamed improvement, nothing about his ability and way he worked pointed to being able to build a new dynasty, a successful one at that. His managerial honours are the Community Shield he won for United and a Second Division title with Preston, he’s a man not used to success and in that, unaware of how best to bring it. United appointed a man whose aim as manager was only ever to “do the best he could” with average sides, to emulate someone who breathed trophies and ate medals for breakfast. The magnitude of the job was known, the expectations were obvious, but both were well out of his grasp and no amount of time could possibly bring the skill set within his reaches. Some might say the job was tainted from the start, but the unfortunate reality is the only thing tainted is the reputation of a man who never should have been there in the first place.

Next up, Jamie Spoor, to offer a defence for Moyesy.

My fellow judge Matt Henderson had laid down the charge sheet and found David Moyes guilty of crimes against football. But, as in legal battle, you always need a good barrister and it is, I, Jamie William Spoor, who today presents to you the case for the defence.

Moyes signed a six-year contract meaning that, in theory, he would have left Old Trafford last summer had all gone to plan. As you are all too painfully aware, things most definitely did not go to plan. Moyes lasted a paltry ten months before turfed out of the job he was hand picked for. It was a job – he admitted – he baulked at when his predecessor and compatriot finally decided to call it a day.

So perhaps the evidence suggest that not only did Moyes find the job “too big” from day one, but also that he felt he didn’t deserve to hold it in the first place. But neither of these things are really his fault – what was he supposed to do? Turn down the job of a lifetime? His track record was good, punching above his weight with a middling Everton side, taking them into Europe and to an FA Cup final. Admirable, but not remarkable. He never won anything, but then again neither has Mauricio Pochettino – a man long touted as a Man Utd manager in waiting. But that’s a story for another day.

I’m not saying I disagreed with Moyes sacking – all the evidence pointed to his dismissal as being the only remaining logical course of action. The champions, admittedly a far from vintage champion side that won it only by the shortcomings of others, had finished seventh with our worst ever league points total. At the time, it made sense that the manager would pay it with his job. But looking back now, as the dust has long since settled and with the benefit of hindsight (a wonderful thing), a case can be had that Moyes did, indeed, deserve at least another season. He made mistakes (who doesn’t) for sure, but replacing the greatest manager there’s ever been was always going to be nigh on impossible.

Jurgen Klopp finished eighth in his first season at Anfield and only now are we seeing that patience pay off. Ole Gunnar Solskjaer, tasked with a similar job spec to that of his predecessor but two, is only just starting to come good. If you want to build a team and leave a legacy, it takes time. For context, Van Gaal had a worst record after the first ten games with the bizarre Dutchman sacked with only one more win and two more points.

The length of his contract suggested that the owners were going with longevity when they made the appointment. After all it had taken Sir Alex almost five years before United even started to see the fruits of his labour. Yet they only gave him ten months – hardly enough time to revamp an ageing, anodyne squad in need of urgent reinforcements. Sure, the core of Sir Alex’s last title winners were still there but the likes of Nemanja Vidic, Rio Ferdinand, Patrice Evra, Robin van Persie and Ryan Giggs et al were in the twilight of their careers and proved more of a curse than a blessing. Ferdinand’s behaviour turned mutinous. Others, like Tom Cleverley, Anderson, Phil Jones, Danny Welbeck and Ashley Young were never up to the task to begin with. As the Glazers tightened the purse strings, Moyes turned to those he thought he could rely on – but instead his most trusted lieutenants were those that arguably let him down the most.

You also have to look at the owners (where have we heard that before). Ed Woodward was new to his job of CEO, too, so to be fair this one cannot really be put on him. This also worked against the new manager as his go-to guy in the boardroom was learning on the job at the same time. A recipe for catastrophe.

Having worked on a shoestring at Everton, the Glazers knew that Moyes would not object to having to do the same at Old Trafford – he signed Fellaini and Juan Mata for a combined fee of around £50m but that pales into insignificance when you look at the shopping habits of the men to come after him. Louis van Gaal and Jose Mourinho were given open chequebooks yet Moyes didn’t have that when he needed it most – that seems a little unfair and shows that he was yet another United manager to be let down by the board.

Let’s not forget either, that LVG and the man after him, Jose Mourinho – two of the finest managers of their generation – met the same fate as Moyes in not dissimilar circumstances with both, as already mentioned, having spent significantly larger sums of money than the Scot.

In his first team meeting as boss, Moyes told his assembled players (via Manchester Evening News): “I can make you run more.” Instead it left them running for cover. That, perhaps more than anything, was telling in the scale of the task David Moyes always had on his hands.