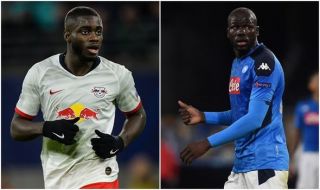 Manchester United are reportedly one of five Premier League clubs interested in signing Dayot Upamecano from RB Leipzig during the next transfer window.

With less than 15 months remaining on his current contract, and no intention to extend his stay with the Bundesliga outfit, United may see this as a good time to make a move for the highly rated defender.

According to France Football, United view Upamecano as a cheaper alternative to Napoli’s Kalidou Koulibaly. The same report outlines that he has a release clause worth £53m (€60m) but Leipzig are prepared to listen to offers of around £35m (€40m) for the Frenchman with his contract nearing the expiry date.

Koulibaly has constantly featured in the MUFC gossips for best part of two years and this summer he may finally leave Napoli.

Moreover, a previous report from La Repubblica claims Napoli president Aurelio de Laurentiis may seek to sanction the sale of Koulibaly, particularly if the club fail to qualify for next season’s Champions League.

The same publication cites that United, Manchester City and Paris Saint-Germain are all interested in the centre-back, and ESPN FC recently done a video on which of the three clubs would best suit Koulibaly, as seen below:

United manager Ole Gunnar Solskjaer landed the signature of Harry Maguire last summer and the England international has definitely improved things at the back for the Red Devils.

You may have been sold by Koulibaly’s performances in the Champions League, but Upamecano is eight years younger and may be more suited to Solskjaer’s plans for the future.