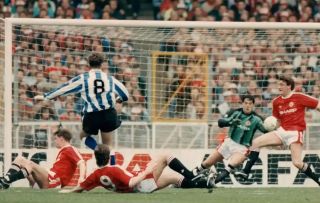 Former Manchester United goalkeeper Les Sealey almost lost his leg after refusing treatment towards the end of a Rumbelows Cup final game against Sheffield Wednesday in 1991.

His former teammate Lee Sharpe has told The Sheffield Star about the terrifying incident in which he could’ve been left with limitations after refusing treatment to a horrible gash suffered around the knee area from a bad challenge.

“It was a really nasty, horrible gash and should have come off,” Sharpe said. “Usually, after every final, we’d have a party in London to celebrate or even if we lost, but this time we didn’t because we had the Cup Winners’ Cup semi a few days later.

“So we went straight to the airports and Les just collapsed. They reckon if we’d got on the plane gangrene would have set in and he would have lost his leg.”

In those days, you didn’t have many substitute goalkeepers, so Sir Alex Ferguson couldn’t readily substitute him after he sustained the injury.

There was no John O’Shea to save the day back then.

Sealey himself refused treatment and was in great danger had he boarded the plane before collapsing.

The late keeper, who died of a heat attack at the age of 43, made 18 appearances for United in a short career with the club, but it’s clear that this very incident left Sharpe scarred for life.

In his 24-year career, Sealey travelled as far afield as Plymouth Argyle and Blackpool.

He first came to United on a month’s long loan from Luton Town in 1989 and made a good enough impression to be kept on.

“Les was a very quiet, unassuming man,” Brian McClair told ManUtd.com. “No, he was exact try the same as you saw him on the pitch! A larger than life figure with a great sense of humour who loved his football and worked hard. He realised he had a marvellous opportunity coming to United and he made the most of it.”