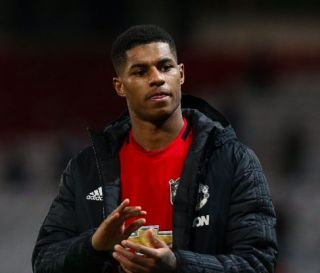 Marcus Rashford admits that he would have risked further injury in order to be available for the European Championships this summer.

The England international suffered a double stress fracture in his back in January during an FA Cup replay against Wolves.

Rashford was Ole Gunnar Solskjaer’s talisman at Manchester United before his injury, and was a serious contender for the golden boot award with 14 goals in the league. He was playing the best football of his fledgling career in his new found inside left-position where he was direct and running at defenders.

But he has been in rehabilitation for several months now and has revealed that he was targeting an April return to be in consideration for Gareth Southgate’s squad.

“I was probably going to go back (to training) mid or end of April,” Rashford told the UTD podcast, as quoted by Manchester Evening News.

“That would have been a push because I didn’t want to miss the summer, so I doubt I would have been 100% fit going into that tournament. Since then a lot has happened (but) for my body it’s been good to give it its full duration to rest.

“I pay attention (to what Rooney says) but at the same time it’s tough to say no to something where you could give it a good go. You want to try to play every game you can.”

We understand Rashford is the kind of player who is always eager to play and itching to get back out there when stuck on the sidelines.

Therefore, had he returned not fully fit from a serious back injury, damage could have been done that affected him later on his career.

Instead, the 22-year-old can take positives from the coronavirus pandemic putting an indefinite suspension on football as it allows him to not rush his recovery.

Rashford now has time to reach peak fitness ahead of a return where he can hopefully continue his impressive goalscoring form.

This unprecedented break during the season has acted as a blessing in disguise for the Wythenshawe lad.