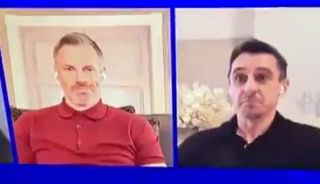 Jamie Carragher, a voice on spitting out.

You will remember how the Liverpool man was filmed spitting at a Manchester United fan and his teenage daughter following a match at Old Trafford in 2018, as reported by the Manchester Evening News – along with Carragher’s apology.

While Carragher was not asked about this issue specifically, the former England international looked a tad awkward and Neville couldn’t help but laugh.

Watch the hilarious clip below:

They may be close mates now that they’re retired footballers in the punditry business — working side-by-side — but it has always been clear that they enjoy winding one another up at any opportunity.