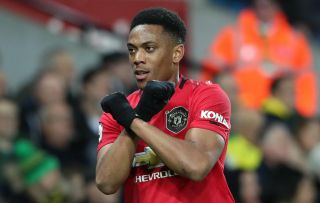 So we’ve asked two Stretty News writers with opposing views to put their arguments to the test.

Please check out the poll at the end of this article and cast your vote.

Anthony Martial should remain as Manchester United’s starting striker next season, given his promising goal tally this year, his influence on United’s other players, and his overall promise for upcoming seasons.

Firstly, Martial’s goal tally has been remarkably understated this season. Despite missing over a month’s worth of matches through injury, he has scored 16 goals in all competitions, United’s highest from open play, according to Transfermarkt, as well as 4 in 5 starts against the league’s top four. In fact, he has three more than Marcus Rashford, despite playing just 200 minutes more than the England international.

As Romelu Lukaku has proven this season, scoring 23 goals in 35 appearances for Inter, United have had deficiencies in the side for years that have hurt the numbers posted by the side’s forwards. If Lukaku didn’t prove it, then Bruno Fernandes certainly did, transforming this United side entirely upon his arrival and displaying the immense gap between the likes of Andreas Pereira and Jesse Lingard and the world’s elite creative midfielders.

In fact, Martial has scored 4 goals in 6 matches whenever played alongside Bruno Fernandes, including strikes against Manchester City and Chelsea. The same type of rise in performance and numbers could be expected if a player of the calibre of Jadon Sancho were to join United.

Not only is Martial proving to be a beneficiary of United’s improvements in attacking areas of late, he is also one of the reasons for it. Martial’s absence earlier in the season led to a massive slump from the entire side, as United only won 1 of the 6 Premier League matches he could not start due to injury.

Martial’s ability to link up the play and drop off opposition defenders creates space for the likes of Rashford and Daniel James, who prefer to run in behind, creating an outlet for the midfielders without the wingers having to drop too deep.

Under Jose Mourinho, with the likes of Zlatan Ibrahimovic and Romelu Lukaku up front, United’s wingers were picking up the ball at the half line and forced to run at defenders, making the side toothless and predictable in attack. Martial is a big part of the reason why the likes of Rashford and Greenwood are scoring more than United’s wingers under Mourinho.

Finally, it is easy to forget that Martial was a discarded, isolated figure that played out wide for three seasons under Mourinho. Ole Gunnar Solskjaer himself stated that it would take time for Martial to readjust to being a striker, and followed up with praise for the Frenchman after the Manchester Derby (via Daily Mail).

“I think Anthony can step up, get a few more and get to the 20 mark [this season].

“He’s got quality of course, he’s a very good finisher. He takes his chances really well. There’s good technique in his finishing.

“He’s good receiving the ball at times and dropping off. He can play almost like a false nine as well.”

United are facing a summer window that could be pivotal in converting Solskjaer’s young side into a European heavyweight. It would simply be ludicrous to replace one of the side’s most uniquely integral players, especially given that he has the talent to easily surpass the 20-goal mark next season.

This has been something that I’ve struggled to figure out the answer to since he signed as a largely u known young lad, for a rather hefty price tag.

Before I get into this, let me state that I believe Anthony Martial is a very talented footballer, and on his day, is a joy to watch, I don’t hate him, I don’t think he’s rubbish.

I just don’t know where he fits into a front 3, which seems to be the style we will be playing, a central striker, a left-sided forward and a right-sided forward.

Central – Martial can play the central, main striker role, he’s not dreadful by any means, but is he the mould of striker you’d consider a target man, a player who can hold up a ball to take off the pressure on the defence, can he bully a strong centre half, will he work hard enough without the ball to excel as a central striker? I don’t believe so. From what we have, he’s definitely one of the two options we have in this position, but I just feel we could potentially sign a player better suited to playing this role, who would offer more all round to the side than what Anthony does playing in this role.

Left side – This is where most believe is Martial’s best position, cutting in onto his right foot, giving right full backs a headache. We’ve seen him do it, to devastating effect! The question that lingers though, is his work rate in the position. Far too often we see him drift out of the game, looking sullen, and giving the impression he’s simply not bothered with running for a ball or tussling with his opposite to win a 50/50. He seems to exude this aura of “if I’m up for it, I’m sensational, if I’m not interested, I’ll just slug around”. It’s not enough, if we want to be hitting the heights we are hopefully aiming to get back to. He doesn’t chase down enough, he gives up far too easily when he loses the ball and you can only twinkle toes past a defender once every now and again, you need to add more, you need to supply others, you need to be a source, he doesn’t give us that enough.

Anthony Martial is a sensational footballer, he’s just not sensational regularly enough to demand the automatic starting XI position he not only has, but if the squad number issues is to be believed, he feels he deserves.

Continually trying to fit him into the front 3 will cost us long-term, if we cannot nail down a position that he can make his own, and regularly give us a 7/10 performance, which is what we need.

I think his direct opposition in Marcus Rashford offers more to the side, and I would have Martial fight it out for his spot rather than be an automatic starter, but unfortunately to do that, we need a squad with depth up top to give us that competition.