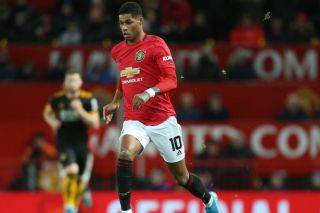 Although people don’t give José Mourinho much credit for developing young players, Marcus Rashford has credited the former Manchester United manager for taking his development to the next level.

Rashford when fit is United’s best forward player — as proven this season — and the England international clearly has a degree of appreciation for the Special One.

Mourinho’s reign ended terribly but he gave us some highs during his time at the club, like winning the Europa League and League Cup, and Rashford reflects more positively than I imaged he would about his time under the current Tottenham boss.

“As an all-round player I’ve improved a lot and a lot of it is down to those two years under Jose,” the United forward told the UTD Podcast, cited by the Daily Express.

“We had ups and downs. When I look back at it, it was a tough period but definitely that made me a better player […] He didn’t care what anyone would say to him or what anyone was saying about him. In terms of his mentality he was key to my development.”

I don’t hide away from being one who wanted Mourinho at United, and I still think it would have went differently had he got the right level of backing from the board, but watching his Spurs side this season you can’t say we are missing out on anything special.

A flushed force perhaps, and you’ve got to give Solskjaer credit for taking us forward. He has made the team likeable again.