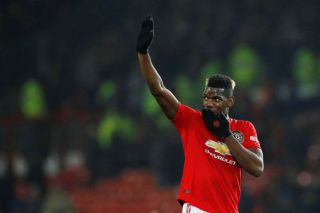 Few could have envisaged, once Jose Mourinho left Manchester United, that the words ‘virus’ and ‘Pogba’ would re-emerge in dark unison two years after they first appeared.

‘Virus’ was, of course, the accusation labelled at the Frenchman for his supposed downing of tools leading to Mourinho’s bitter Old Trafford exit and ever since, as habitual as day becomes night, Pogba is still the predominant talk around United.

The pandemic has been costly in the most devastating way – the taking of human lives but also in a football sense, the effects will be incredibly profound. There will be a few clubs able to inoculate themselves of the effects – United could likely put their name among a privileged few, but the overwhelming consensus is that the eye watering Neymar esque deals, which changed the football financial landscape, will be few and far between.

There was a time when Pogba took the crown as the world’s costliest footballer. Critically, probably for the first time in this United v Pogba power struggle, United are at the top table and hold the majority of the cards.

Say it quietly, but United are becoming an attractive proposition once more. The break from football has afforded people the time to calmly reflect on Ole Gunnar Solskjaer’s extensive cleansing mission. For all the smatterings of people branding OGS as nothing more than a glorified PE teacher, there are now many more voices heralding his work. There is a clear direction and acceptance that this will take more time. The recruitment ranges from good to excellent, dependent on your opinion. Aaron Wan-Bissaka was always a fantastic defender but now we are seeing an evolution to his attacking side. Daniel James has surpassed expectations. Harry Maguire has grown into the armband and started to show everyone why he is the real deal. And Bruno Fernandes… Wow! He has lit up the place. Dare I say was he everything we expected of Pogba?

Pogba will have noticed.

Or is the cold, harsh truth that the aforementioned financial ramifications of the pandemic has now cost Pogba a move to one of his two unswerving yearnings? Will Juventus be able to stump up the necessary cash for their own #PogBack after a few seasons of signing free agents who can justify more lavish wages and still contain a certain CR7 who pockets close to a million pounds a week? Will Real Madrid, as much as it’s clear they see they need another Galactico rebuild, be able to justify it with all that’s going on and their last Galactico Eden Hazard nowhere near representing the value they all thought they were getting?

My gut feeling is that there is every chance Paul Pogba will stay a Manchester United player, but for entirely the wrong reasons.

His agent, Mino Raiola, is a fat cat in metaphorical and literal meanings. His body of work has treated him well financially, which I suppose is his end game, his raison d’etre, but look at the way the Pogba talk never dies down, it is now happening to Matthijs De Ligt and Erling Haaland – two of the games most stunning prospects. Their airlines have barely touched down on the Turin and Dortmund runways respectively and yet there is talk of them making another transfer.

You have to ask yourself, does Mino Raiola have Pogba’s best interests at heart or merely his wallet? That, in turn, makes me question does Pogba truly have Manchester United in his heart? Would Manchester United be better off without the continual Pogba circus? Pogba may not be the literal architect, but by allowing Raiola and his own brothers to incessantly bang the Madrid drum, in a way they have added fuel to a fire Pogba started by openly declaring a desire for a ‘new challenge in summer 2019.

Pogba may have been sold a Utopian dream which has remained unfulfilled, but are United now on their way to being that ‘new challenge’? There is every chance that Jadon Sancho fills that gaping hole on the right side and is the next game changer. What if United further strengthened their backline with a Kalidou Koulibaly or the anchor role with a Thomas Partey or Saul Niguez? United will have never been in as strong a position to challenge for the title last won in 2013.

The truth is, Pogba has never had as excellent a midfield partner than Bruno Fernandes and you wonder if there is a desire there to see if there are sparks.

United will undoubtedly exercise the year-long contract extension in Pogba’s contract, effectively keeping him on the books until 2022. Given his unquestionable social media marketability, United would surely not entertain any offers below what they originally paid for him, market crash or not.

It is another genuine Catch-22 for United. Does Pogba upset the chemistry and balance the current crop have struck up in his prolonged absence? Or does Solskjaer see him as part of this new era of harmony, dedication and spirit? Those who are closer to him than we will ever be have glowing character references, with not a bad word to say. From our outside station, though, some have their reasons to paint an entirely different picture.

Fred and Scott McTominay have had breakout seasons and Bruno Fernandes represents a character we have been crying out for in the midfield since the glory days. Do United see it more viable to cut their ties with Pogba, accept things have not gone as imagined and bring in say a Grealish and Partey for the Pogba money?

For me, Paul Pogba can only stay a Manchester United player if he shuts down all the noise, shows unwavering commitment and pledges to stay for the remainder of his career.

Are United still the mugs that would tie him down to make him the highest paid player, say on a 5 year deal, only for him to want out 12 months down the line? I would like to think not. So, if he does pen fresh terms, it has to be for all the right reasons, anything less is not acceptable.

One thing is for sure, the Paul Pogba circus must stop one way or another.