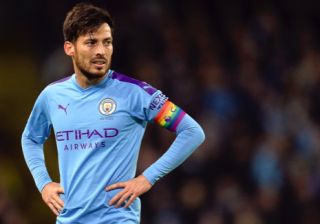 Manchester City captain David Silva has named four Manchester United greats in a list of the toughest opponents he has faced in his career.

Silva is expected to leave City this summer after 10 years at the Etihad where he has established himself as one of the best players the club has ever seen.

The Spaniard included four members of the famous ‘Class of 92’ that graduated from United’s academy in a list of the best players he has come up against.

“I can name a lot of rivals too. [Frank] Lampard, who was my team-mate too, his stats were amazing and he was a great man too,” Silva told CityTV, as quoted by the Mirror.

“There are a lot of Spanish players too like Fernando Torres, Cesc [Fabregas], who has also done great things in the Premier League.

“Players that are part of the competition like Ryan Giggs, Paul Scholes, the Neville brothers. They were all fantastic players and very passionate for their club and the national team too.”

What is noticeable in Silva’s list of toughest opponents is, as well as the talent they all share,  they are all winners.

Giggs is the most decorated footballer ever to play in English football with 13 Premier League titles and two Champions Leagues. Scholes, meanwhile, is arguably the most talented midfielder of his generation.

Gary and Phil Neville may not have been recognised as having the most natural ability, but their determination and unequivocal desire to be the best made them challenging opponents.

There are plenty of other United greats that Silva has come up against over the years that could have been mentioned in this list as well!