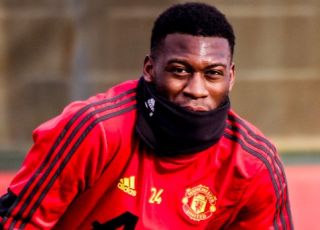 As reported by the the Daily Mail, United have chosen to trigger the one-year extension in the Dutch defender’s contract, keeping him at the club until 2021.

United have also recently decided to trigger extensions in the contracts of two more senior players in Eric Bailly and Nemanja Matic.

Fosu-Mensah has not featured for the Reds since May 2017 and has endured injury-ravaged loan spells at Crystal Palace and Fulham.

But he still harbours hopes of achieving great success at United and has outlined his goals at the club.

“Who doesn’t want to play for United?” Fosu-Mensah told the PA news agency, as quoted by Manchester Evening News.

“So, yeah, I’m definitely eager to come back and to do well and to help the team and to give my all, my heart for this great club,” he said.

“I think that’s everyone’s goal who plays in the team for Manchester.”

Fosu-Mensah will be well aware of how much work he has to do to make his way into Ole Gunnar Solskjaer’s first-team after being handed another chance by the Norwegian manager.

The 22-year-old must initially focus on regaining full fitness with a serious knee injury sustained at Fulham halting his progress this term.

United are currently stacked in options all across defence, with sufficient cover in both the central defence and full-back areas.

We think that Fosu-Mensah must impress in Neil Wood’s u23 development side and wait for his chance in the first-team when football eventually returns.

Fosu-Mensah has shown United fans glimpses of his talent but he has reached a vital stage of his career where he must kick on if he is to make it at Old Trafford.