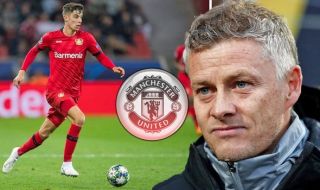 Manchester United have added Bayer Leverkusen star Kai Havertz to their summer transfer shortlist, according to the Evening Standard.

Following two successful transfer windows as United manager, United are expected to trust Ole Gunnar Solskjaer, granted they are not the club the Mirror’s John Cross is referring to in his latest report stating that one Premier League giant is losing £9m per week as coronavirus crisis begins to take a financial toll.

We don’t think that’s United — so we should be one of a few English clubs able to spend in the summer.

Solskjaer confirmed that the club were still holding internal discussions about transfer targets despite the suspension of football until it is safe to play again.

It is understood that the manager is looking to bring reinforcements to their attacking ranks, with the future of Odion Ighalo still unknown.

Havertz is one of the best young midfielders in Europe and is the youngest player to ever make 100 Bundesliga appearances.

He has 10 goals and eight assists to his name this season which may explain why Liverpool and Bayern Munich are also being linked with the Germany international.

Meanwhile, Real Madrid are reportedly out of the race to sign Tottenham Hotspur’s Harry Kane, which the Mail on Sunday claim paves the way for United to swoop.

It is noted that the La Liga giants have “no intention of joining the race” which is likely to be a reaction to Spurs asking for ridiculous money.

And, I can’t see United biting the bullet and spending £150m+ on Kane when they are in the market for someone like Jadon Sancho, who would be a better investment.

Keeping the best til last, I couldn’t stop laughing at this morning’s report from Don Balon in Spain which links Pogba with a move to Newcastle United. Yes, Newcastle United…

As recently reported by the Mirror, the Magpies are close to being taken over by a wealthy Saudi Arabia-backed consortium in what could mean an end to the highly unpopular ownership of Mike Ashley.

It goes without saying that the France international would be taking a huge risk leaving MUFC for the new project at St James’ Park, but they dress it up by suggesting he could be joined by other Galactico-esque signings.

Don Balon also suggest Newcastle could be in for the likes of Kylian Mbappe, Jadon Sancho, Edinson Cavani and Arturo Vidal.