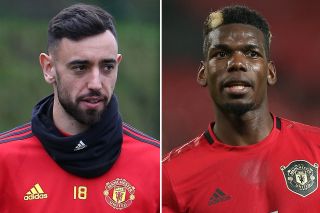 Fernandes has made an excellent start to life at Old Trafford since joining from Sporting Lisbon in January.

The totemic Portugal midfielder has inspired United’s eleven game unbeaten run before the coronavirus put an indefinite suspension on football.

He has won the club’s player of the month for February and March, thriving in an attacking midfield role in Ole Gunnar Solskjaer’s 4-2-3-1 system.

But Fernandes has not yet had the luxury of partnering Paul Pogba in midfield. The Frenchman’s season has been disrupted by injury problems and he has not played for the Reds since the turn of the year.

Pogba has been in rehabilitation after having surgery on an ankle injury, but was finally closing in on a return to first-team training before the break.

“[Fernandes] has been brilliant since he’s come in, off the field around the training ground, he’s a leader and wants to win,” he told Sky Sports, as quoted by ESPN.

“He’s just given us that little bit more life and creativity in the middle, something United fans have said we’ve missed over the years.

“We’ve got Paul to come back as well, who I’m sure will probably make him lift his game even more.

“We have a lot of competition in that centre midfield now, they know they have to be on their game to keep their spot, so I’m sure we’ll see the benefit.”

Pogba has his fair share of critics but is still a world-class midfielder on his day and arguably the most talented player in Ole Gunnar Solskjaer’s squad.

If the World Cup winner remains at Old Trafford beyond this season, Solskjaer has to find a way of getting him and Fernandes within the same side.

The addition of Pogba makes United a move creative and dangerous attacking force and perhaps the Norwegian will revert to an orthodox 4-3-3 formation to accommodate both of his star midfielders.