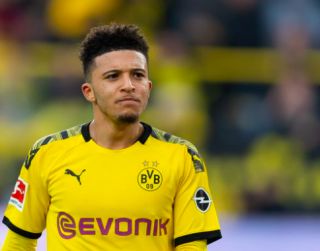 Reports coming out on Monday morning suggested Jadon Sancho has already agreed personal terms ahead of a transfer to Manchester United.

It has been widely documented that the Borussia Dortmund starlet is a leading target for Ole Gunnar Solskjaer, who is focusing his attention on a right-winger as he looks to correct the imbalance in his side this summer.

Sancho netted 14 times and assisted a further 15 in the Bundesliga this season in a fantastic return of goal contributions before the coronavirus pandemic put an indefinite suspension on football.

According to the Sun, the COVID-19 crisis has not prevented United from entering negotiations with the 20-year-old over his future. Their report claims the England international’s contract, salary, bonuses and buyout clause have all been agreed after months of secret talks between the two clubs.

However, Graeme Souness is not buying these rumours and believes United are at risk of having their ‘trousers taken down’ if this is the route they take in trying to complete the transfer.

READ MORE: Timothy Fosu-Mensah reveals three Man United targets but has plenty of work to do

“I don’t see it, unless the whole world has changed,” Souness said on Sky Sports, as quoted by Manchester Evening News.

“I don’t think you get into personal terms, length of contract, buy-outs and clauses until the two clubs have decided on a fee.

“I mean the first thing is that the two clubs come to an agreement, the rest comes second, so I’m not sure that can be correct.

“If you’re Man United and you are doing that, without a deal done with Dortmund, you will have your trousers taken down when you get round a table with Dortmund.

“Because they know the strength of your offer, they know you are very much up for it, so you’re taking away any negotiating power if you go down that road.

“You could do it behind everyone’s back but the facts are in the public domain and the fact that ‘someone from Dortmund’ is saying that the player spoke to someone from Man United. I don’t see that being a goer personally.

“The transfer may happen but I don’t see it happening in that chronological way. I think there has to be two clubs to two clubs and then you get down to the nitty gritty.”

Sancho is the most coveted young player in world football right now and his signing would represent a huge coup for Solskjaer as he looks to accelerate his Old Trafford rebuild.

But as noted by Liverpool great Souness, United must focus on talks with Dortmund if they are to strike a deal.

As reported by Sky Sports, the German giants will demand £100m for their star and United may be reluctant to part ways with so much cash in these times of financial uncertainty.