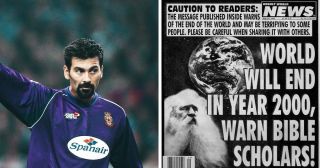 Argentina World Cup hero Carlos Roa turned down a chance to replace Peter Schmeichel in 1999 because of his religious beliefs.

Manchester United had their eye on the shot-stopper in 1999 after his heroics helped Argentina knock England out of the 1998 World Cup.

Roa, a devout Seventh-day Adventist, has revealed that he rejected an opportunity to replace Schmeichel at Old Trafford because he thought the world was going to end in the year 2000…

Speaking to The Mirror, the Argentine said: “At that time I was very attached to religion and bible study. It was a difficult decision to make but at the same time thoughtful — and my family agreed with me.

“Certain things have happened that will never be known because they are personal and I could only speak to the most intimate people. Many things were said back then out of ignorance and I was branded a thousand bad things.

“The people of the club thought that I was going to go back and that they would recover a lot of money with that transfer that was about to happen. Today, I still think that on a spiritual level it was a very good decision.

“But in sporting terms it wasn’t — because I left football at the best moment of my career. I could have progressed a lot, with great contracts and the possibility of playing in England.

“People will never understand it. Back then they drove me crazy, they called me from all sides, and as much as I tried to explain my decision it was very difficult for them to understand.”

At 30, he told his Spanish club Mallorca he was hanging up his boots to follow his faith — just as his career was about to peak.

Roa struggled to rediscover his form and missed out on a move to United.

Of all stories I’ll have to write today, on the scale of craziness this won’t be beaten.

Roa’s decision to snub United caused Sir Alex Ferguson one of his biggest headaches as he spent a fortune on trying to replace Schmeichel.

It wasn’t until Edwin van der Sar arrived at Old Trafford in 2005 that Fergie found another world-class keeper.