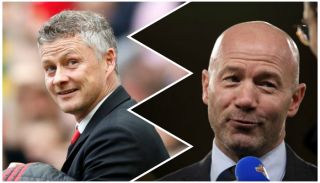 Alan Shearer believes Manchester United are in an advantageous position to capitalise on other clubs’ financial situation ahead of the summer transfer window.

Ole Gunnar Solskjaer is looking to accelerate his Old Trafford rebuild this summer, despite the huge amount of uncertainty amid the coronavirus pandemic.

There’s reason for cautious optimism at United after an unbeaten run of eleven games before the indefinite suspension of football.  But several additions are still needed if the Reds are to close the large gap on bitter rivals Manchester City and Liverpool.

We feel Solskjaer needs to add a midfielder, right-winger and centre forward to his ranks this summer.

And Newcastle legend and pundit Shearer has named three English stars that could help build the spine of the Norwegian’s side.

“Ole Gunnar Solskjaer was spot on when he said there could be a number of clubs forced into selling their big players for financial reasons,” he told The Sun.

“Whereas the majority will look to survive first before looking at transfer targets, Manchester United are in a different boat.

“And with their financial clout, they are in a good position to take advantage in future transfer markets once football is eventually back.

“Those three are exactly the types they need if they are to compete at the top again.”

Sancho has reportedly been identified as the number one transfer target this summer and we hope the club can prize him away from Borussia Dortmund. The 20-year-old is the perfect solution to the lack of natural right-sided player in the squad. The England international has netted 14 times in the Bundesliga this season.

Grealish, meanwhile, is another player that is seen as attainable, and is an exciting proposition as a versatile midfielder with star quality. As noted by the Evening Standard, United believe they could sign the Aston Villa captain for £60m.

However, the chances of signing England captain Kane from Tottenham are extremely remote, particular if the club are also focusing their attention on Sancho. The Daily Mail report Kane is being valued at around £200m and there are far cheaper alternatives that United should consider such as prolific Lyon forward Moussa Dembele.