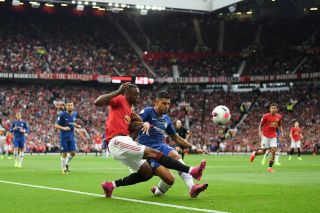 Aaron Wan-Bissaka has reflected on his Manchester United debut — admitting that the nerves almost got the better of him.

Speaking to The Sun, the young full-back said: “My family wanted to stay at my house for two weeks before that game they were so excited.

“The game felt different. It felt like the debut I made for Crystal Palace [in 2017] all over again. The nerves kicked in.

“There’s a lot of pressure at United. It’s just how you deal with it. You realise the whole world is watching, not just your fans.”

Wan-Bissaka is definitely coming to terms with the pressures that come with playing for the biggest football club in England. It would be fair to say we now have a right-back that’s one of the best in the land, especially when it comes to defending there are few anywhere near as good.

He made his official debut for United in the 4-0 demolition of Chelsea on the opening day of the season.

With the season put to a halt over the coronavirus pandemic, Wan-Bissaka’s first season at United has been interrupted but we hope it returns at some point in the near future, even if that means playing games behind closed doors.

If we had football matches behind closed doors at least we’d have something to look forward to for 40 days or so… I wouldn’t be surprised if football stadiums were made wait until 2021 to reopen for fans.

Send us your thoughts by tweeting @StrettyNews.