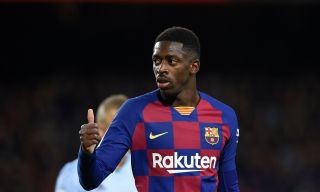 Manchester United are reportedly one of the clubs keeping track of Barcelona forward Ousmane Dembele.

The France international has struggled with injuries during his time the Nou Camp, but has long been considered one of the hottest prospects in football.

According to Sport, this has led to both United and Arsenal to take a close look at him and get as good an idea as possible about the nature of his fitness problems ahead of a potential move.

They also claim Dembele himself has contacted fellow France international Anthony Martial to ask about life in Manchester and it seems like he’s prepared to make the move.

United may need more quality going forward but I can’t see us joining any race to sign Dembele if we’re able to strike a deal with Borussia Dortmund for Jadon Sancho.

Sancho is the one United want and Dembele may only being an option if we struggle to sign the England international.

Even at that, there’s another player in Spain I would much prefer to Dembele and he plays for Valencia. 20-year-old Spaniard.