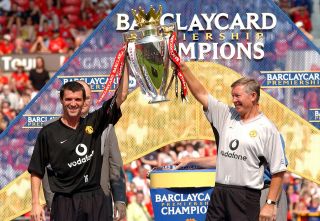 As we sit back in lockdown times, a vast hole in our life in the shape of a football being kicked around by a bunch of overpaid chaps, it gives us time to analyse (and over analyse) the current situation with our own beloved club.

The most commonly spoken about topic at the moment, due to the lack of actual football, is the transfer market. Who’s coming in? Who fits the system? Who’s being sold? How much are they worth?

Through many, many discussions, I seem to get the feeling that our fanbase is starting to slide into a more acceptant attitude, regards our squad, our aspirations, our potential.

Let me put it this way, there was a time when we sold players like Ince, Kanchelskis, Beckham, Keane, Ronaldo, DiMaria. Big players, some big money, and all of them a big loss at the time (bar Di Maria the snake 🐍). But we identified they needed to go, be it their own aspirations, personal issued, personality clash or just rotten eggs.

Now we debate whether Lingard should stay or go, an abysmally underperforming, self-proclaimed “one of the best #10’s around”, of we’re young believe what we’re told.

We wonder if defenders like Eric Bailly, who’s made of Weetabix, Phil Jones who’s Phil Jones and Marcus Rojo, who wouldn’t look out-of-place in a South American boy band as the bad boy, will ever make it, will they be good enough?

We try to pigeon-hole Anthony Martial and Marcus Rashford into a front 3, when realistically the two of them together doesn’t work that well, Martial confuses most of us as to where exactly he fits and if we’ll end up shoeing him into positions like we did Mata, just to fit him into the side.

We hear that “you can’t sign a big name striker, it’ll destroy Greenwood’s chances”, forgetting that if Greenwood is actually good enough, the striker won’t matter to him, he’ll push him aside or we’ll end up fitting them into a workable system.

“You have to hold onto Matic, he’s been brilliant the last few weeks”. He’s also be utterly awful for 12 months previous and had all but finished when we needed to drag him back in because of injuries.

It’s festered from the continual dreadful work in the transfer market by mangers with no sense of direction and a scouting system that doesn’t seem to function, leaving us with a pathetically under strength squad lacking in-depth front to back.

I put it to you, what’s stopping us from assaulting the transfer market?

We’re one of the richest clubs on earth, we’ve heard our manager say we are in a position to take advantage of clubs needing to sell due to the economic downturn, we have the money, we need the players, so why not just get it done?

Jadon Sancho (£120m via The Metro) from Dortmund. It’s a risk, it’s a massive fee for a young lad, but if it means our right side up top is finally solved after years of us all begging for that, go for it.

Jack Grealish (£70m via Evening Standard) from Villa, who’s a baller, he’s got a bit of bottle about him, the worry is his character, buts definitely a quality footballer

Harry Kane (£200m via Sky Sports) from Spurs. This ones a bit amusing, as nobody really believes it’s possible, and all just a big bad rumour. Dangle that carrot in front of Levy, who knows?

We have an abundance of deadwood that we need to shift, so get shifting, bring down the outlay by flogging the Pereira’s, the Lingard’s, the Smalling’s, the Sanchez’s of the side, and there is nothing unrealistic about spending them figures to light a rocket under our arse and shove us back up that table.

We have youngsters coming through, again, if they’re good enough, they’ll make it, we have a manager who is willing to give them a chance and we have a spine of a very good side in place.

Why don’t we show our dominance capability in the transfer market?

Why don’t we become ruthless, as we once were?

Why don’t we demand an improvement, and get it, instead of just talking about it?

Remember, we’re Manchester United, battling it out for top 4 is not what we’re about, it hasn’t been for the past 30 or so years, although lately it looks like maybe we are slipping into that mould…