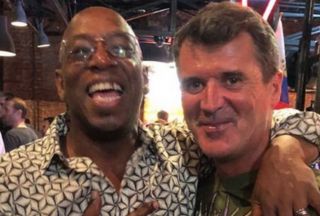 I love listening to stories about Roy Keane and this is one of the best from recent times.

When I say recent, it was 2018 and nobody was worried about social distancing. Just time keeping!

On the Match of the Day: Top 10 podcast this week, Ian Wright and Alan Shearer both picked their top 10 European players in Premier League history and guess how they both agreed was no.1?

“He was, for me, the best captain in the Premier League,” said Wright, as quoted by The Metro. “What he ushered in with the [Class of] 92, with the great players around him and the consistency of his performances, without compromising exactly what he was about, in respect of the way he sees the game, his principles and his morals; honestly, I’ve got so much admiration for Roy Keane.”

Wright and Keane joined forces in the summer of 2018 as part of the ITV punditry team for the World Cup that summer. Who doesn’t remember the time Keano made fun of the ex-Arsenal star and all of England for losing the run of themselves during the tournament before being eliminated by Iceland?

Off-air they seem to have got on well, until Wright fell foul on Keane’s standards on one occasion, with the hilarious story told in the video below:

Keane never lets his shield down and still loves getting one over Arsenal.

In fairness to Wrighty, he took the gesture on the chin and his admiration for Keane still shines through.