As reported by the Telegraph, Bellingham has already visited United’s Carrington training ground and was accompanied on a tour of the facility by Sir Alex Ferguson.

The 16-year-old is regarded as a generational talent and has made 25 appearances in his breakthrough season in the Championship.

Solskjaer is focusing his rebuild around young, exciting players and Bellingham has been identified as a star for the long-term.

But as noted by Sky Sports reporter James Cooper, United’s plan is to immediately keep Bellingham as part of the first-team squad, rather than loan him back out to Birmingham.

We think the youngster could benefit from another season enjoying regular first-team game time in the competitive Championship division.

But Solskjaer clearly thinks Bellingham is ready to step up and fight for his place at one of the biggest clubs in world football.

United are pushing to complete a deal for Bellingham regardless of where Paul Pogba’s future lies this summer. According to the Sun, the club are confident they can secure a transfer for an initial £35m rising to £50m with add ons. 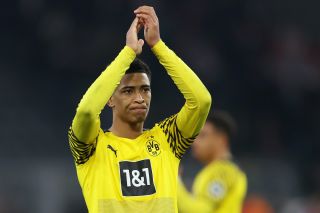