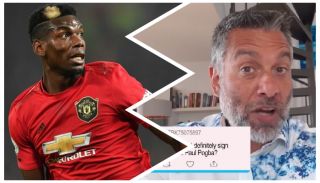 Spanish football journalist Guillem Balague has backed Paul Pogba to remain at Manchester United and sign a new contract with the club.

Speaking on his YouTube channel, Balague said: “Paul Pogba was a target for Zidane, not so much for the club, and the money involved in that deal means that Real Madrid I don’t think have Paul Pogba as a priority.

“I do feel that a player like him would be better serviced to be at Manchester United where he will be the leader, physically he will be fit finally and it seems like they are at least a stable club right now, there won’t be changes.

“I know that the coaching staff at Manchester United feel that Pogba is a good leader, perhaps not so much when things are going wrong, but when they are going right, and you’ve got to hope. For Manchester United fans anyway, that the finances are in the right place to at least be able to get a stable team,” he added.

The France World Cup-winner has been out injured for a long time, missing most of the season with ankle issues, and had to undergo surgery.

Pogba was close to returning but then the coronavirus pandemic brought things to an abrupt halt.

He has been long linked with Real Madrid or a return to Juventus, but now it seems he could stay, and The Athletic are claiming that Ole Gunnar Solskjaer may be about to drop plans to sign Aston Villa playmaker, instead prioritising a holding midfielder.

The 27-year-old was also backed by new signing Bruno Fernandes to return to the fold stronger once the season resumes — which is now planned for the summer if all goes well.